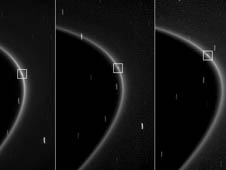 This sequence of three images, obtained by NASA's Cassini spacecraft over the course of about 10 minutes, shows the path of a newly found moonlet in a bright arc of Saturn's faint G ring. Image credit: NASA/JPL/Space Science Institute
Full image and caption NASA's Cassini spacecraft has found within Saturn's G ring an embedded moonlet that appears as a faint, moving pinprick of light. Scientists believe it is a main source of the G ring and its single ring arc.

Cassini imaging scientists analyzing images acquired over the course of about 600 days found the tiny moonlet, half a kilometer (about a third of a mile) across, embedded within a partial ring, or ring arc, previously found by Cassini in Saturn's tenuous G ring.

The finding is being announced today in an International Astronomical Union circular. Images can be found at http://www.nasa.gov/cassini, http://saturn.jpl.nasa.gov and http://ciclops.org .

"Before Cassini, the G ring was the only dusty ring that was not clearly associated with a known moon, which made it odd," said Matthew Hedman, a Cassini imaging team associate at Cornell University in Ithaca, N.Y. "The discovery of this moonlet, together with other Cassini data, should help us make sense of this previously mysterious ring."

Saturn's rings were named in the order they were discovered. Working outward they are: D, C, B, A, F, G and E. The G ring is one of the outer diffuse rings. Within the faint G ring there is a relatively bright and narrow, 250-kilometer-wide (150-miles) arc of ring material, which extends 150,000 kilometers (90,000 miles), or one-sixth of the way around the ring's circumference. The moonlet moves within this ring arc. Previous Cassini plasma and dust measurements indicated that this partial ring may be produced from relatively large, icy particles embedded within the arc, such as this moonlet.

Scientists imaged the moonlet on Aug. 15, 2008, and then they confirmed its presence by finding it in two earlier images. They have since seen the moonlet on multiple occasions, most recently on Feb. 20, 2009. The moonlet is too small to be resolved by Cassini's cameras, so its size cannot be measured directly. However, Cassini scientists estimated the moonlet's size by comparing its brightness to another small Saturnian moon, Pallene.

Hedman and his collaborators also have found that the moonlet's orbit is being disturbed by the larger, nearby moon Mimas, which is responsible for keeping the ring arc together.

This brings the number of Saturnian ring arcs with embedded moonlets found by Cassini to three. The new moonlet may not be alone in the G ring arc. Previous measurements with other Cassini instruments implied the existence of a population of particles, possibly ranging in size from 1 to 100 meters (about three to several hundred feet) across. "Meteoroid impacts into, and collisions among, these bodies and the moonlet could liberate dust to form the arc," said Hedman.

Carl Murray, a Cassini imaging team member and professor at Queen Mary, University of London, said, "The moon's discovery and the disturbance of its trajectory by the neighboring moon Mimas highlight the close association between moons and rings that we see throughout the Saturn system. Hopefully, we will learn in the future more about how such arcs form and interact with their parent bodies."

Early next year, Cassini's camera will take a closer look at the arc and the moonlet. The Cassini Equinox mission, an extension of the original four-year mission, is expected to continue until fall of 2010.

The Cassini-Huygens mission is a cooperative project of NASA, the European Space Agency and the Italian Space Agency. The Jet Propulsion Laboratory (JPL), a division of the California Institute of Technology in Pasadena, manages the Cassini-Huygens mission for NASA's Science Mission Directorate, Washington. The Cassini orbiter and its two onboard cameras were designed, developed and assembled at JPL. The imaging team is based at the Space Science Institute, Boulder, Colo. Media contact:
Carolina Martinez
818-354-9382
Jet Propulsion Laboratory, Pasadena, Calif.
carolina.martinez@jpl.nasa.gov