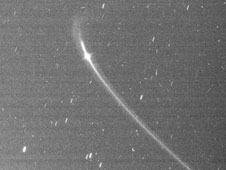 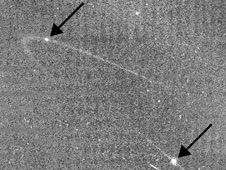 Arrows indicate the positions of the moons Anthe, at top left, and Methone, at bottom right. Micrometeoroid impacts on the moons are the likely source of the arc material. Image credit: NASA/JPL/Space Science Institute
Full image and caption
PASADENA, Calif. -- NASA's Cassini spacecraft has detected a faint, partial ring orbiting with one small moon of Saturn, and has confirmed the presence of another partial ring orbiting with a second moon. This is further evidence that most of the planet's small, inner moons orbit within partial or complete rings.

Recent Cassini images show material, called ring arcs, extending ahead of and behind the small moons Anthe and Methone in their orbits. The new findings indicate that the gravitational influence of nearby moons on ring particles might be the deciding factor in whether an arc or complete ring is formed.

Both Anthe and Methone orbit Saturn in locations, called resonances, where the gravity of the nearby larger moon Mimas disturbs their orbits. Gravitational resonances are also responsible for many of the structures in Saturn's magnificent rings. Mimas provides a regular gravitational tug on each moon, which causes the moons to skip forward and backward within an arc-shaped region along their orbital paths, according to Nick Cooper, a Cassini imaging team associate from Queen Mary, University of London. "When we realized that the Anthe and Methone ring arcs were very similar in appearance to the region in which the moons swing back and forth in their orbits due to their resonance with Mimas, we knew we had a possible cause-and-effect relationship," Cooper said.

Scientists believe the faint ring arcs from Anthe and Methone likely consist of material knocked off these small moons by micrometeoroid impacts. This material does not spread all the way around Saturn to form a complete ring, because of the gravitational resonance with Mimas. That interaction confines the material to a narrow region along the orbits of the moons.

This is the first detection of an arc of material near Anthe. The Methone arc was previously detected by Cassini's Magnetospheric Imaging Instrument, and the new images confirm its presence. Previous Cassini images show faint rings connected with other small moons either embedded within or near the outskirts of Saturn's main ring system, such as Pan, Janus, Epimetheus and Pallene. Cassini had also previously observed an arc in the G ring, one of Saturn's faint, major rings.

"This is probably the same mechanism responsible for producing the arc in the G ring," said Matthew Hedman, a Cassini imaging team associate at Cornell University in Ithaca, N.Y. Hedman and his Cassini imaging team colleagues previously determined that the G-ring arc is maintained by a gravitational resonance with Mimas, much like the new, small moon arcs. "Indeed, the Anthe arc may be similar to the debris we see in the G-ring arc, where the largest particles are clearly visible. One might even speculate that if Anthe were shattered, its debris might form a structure much like the G ring," Hedman said.

Additional analysis by scientists indicates that, while the gravitational influence of Mimas keeps the Anthe, Methone and G-ring arcs in place, the material that orbits with the moons Pallene, Janus and Epimetheus is not subject to such powerful resonant forces and is free to spread out around the planet, forming complete rings without arcs.

The intricate relationships between these ring arcs and the moons are just one of many such mechanisms that exist in the Saturn system. Cassini Imaging Team Member and Professor Carl Murray, also from Queen Mary, University of London, said, "There are many examples in the Saturn system of moons creating structures in the rings and disturbing the orbits of other moons. Understanding these interactions and learning about their origins can help us to make sense of what we are seeing in the Cassini images."

Images of Anthe and Methone with their ring arcs are available at: http://www.nasa.gov/cassini, http://saturn.jpl.nasa.gov and http://ciclops.org.