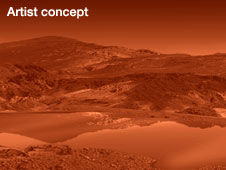 
PASADENA, Calif. -- NASA scientists have concluded that at least one of the large lakes observed on Saturn’s moon Titan contains liquid hydrocarbons, and have positively identified the presence of ethane. This makes Titan the only body in our solar system beyond Earth known to have liquid on its surface.

Scientists made the discovery using data from an instrument aboard the Cassini spacecraft. The instrument identified chemically different materials based on the way they absorb and reflect infrared light. Before Cassini, scientists thought Titan would have global oceans of methane, ethane and other light hydrocarbons. More than 40 close flybys of Titan by Cassini show no such global oceans exist, but hundreds of dark, lake-like features are present. Until now, it was not known whether these features were liquid or simply dark, solid material.

"This is the first observation that really pins down that Titan has a surface lake filled with liquid," said Bob Brown of the University of Arizona, Tucson. Brown is the team leader of Cassini’s visual and mapping instrument. The results will be published in the July 31 issue of the journal Nature.

Ethane and several other simple hydrocarbons have been identified in Titan’s atmosphere, which consists of 95 percent nitrogen, with methane making up the other fiver percent. Ethane and other hydrocarbons are products from atmospheric chemistry caused by the breakdown of methane by sunlight.

Some of the hydrocarbons react further and form fine aerosol particles. All of these things in Titan's atmosphere make detecting and identifying materials on the surface difficult, because these particles form a ubiquitous hydrocarbon haze that hinders the view. Liquid ethane was identified using a technique that removed the interference from the atmospheric hydrocarbons.

"Detection of liquid ethane confirms a long-held idea that lakes and seas filled with methane and ethane exist on Titan," said Larry Soderblom, a Cassini interdisciplinary scientist with the U.S. Geological Survey in Flagstaff, Ariz. "The fact we could detect the ethane spectral signatures of the lake even when it was so dimly illuminated, and at a slanted viewing path through Titan's atmosphere, raises expectations for exciting future lake discoveries by our instrument."

The ethane is in a liquid solution with methane, other hydrocarbons and nitrogen. At Titan’s surface temperatures, approximately 300 degrees Fahrenheit below zero, these substances can exist as both liquid and gas. Titan shows overwhelming evidence of evaporation, rain, and fluid-carved channels draining into what, in this case, is a liquid hydrocarbon lake.

Earth has a hydrological cycle based on water and Titan has a cycle based on methane. Scientists ruled out the presence of water ice, ammonia, ammonia hydrate and carbon dioxide in Ontario Lacus. The observations also suggest the lake is evaporating. It is ringed by a dark beach, where the black lake merges with the bright shoreline. Cassini also observed a shelf and beach being exposed as the lake evaporates.

"During the next few years, the vast array of lakes and seas on Titan's north pole mapped with Cassini's radar instrument will emerge from polar darkness into sunlight, giving the infrared instrument rich opportunities to watch for seasonal changes of Titan's lakes," Soderblom said.

The Cassini-Huygens mission is a cooperative project of NASA, the European Space Agency and the Italian Space Agency. The Jet Propulsion Laboratory, a division of the California Institute of Technology in Pasadena, manages the Cassini-Huygens mission for NASA's Science Mission Directorate, Washington. The Cassini orbiter was designed, developed and assembled at JPL. The Visual and Infrared Mapping Spectrometer team is based at the University of Arizona.