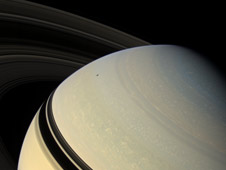 The ringed planet sits in repose, the center of its own macrocosm of many rings and moons and one artificial satellite named Cassini. Image credit: NASA/JPL/Space Science Institute
›  Full image and caption
›  Cassini's Adventure Ends, and Begins Anew
PASADENA, Calif.—NASA's Cassini mission is closing one chapter of its journey at Saturn and embarking on a new one with a two-year mission that will address new questions and bring it closer to two of its most intriguing targets—Titan and Enceladus.

On June 30, Cassini completes its four-year prime mission and begins its extended mission, which was approved in April of this year.

Among other things, Cassini revealed the Earth-like world of Saturn's moon Titan and showed the potential habitability of another moon, Enceladus. These two worlds are primary targets in the two-year extended mission, dubbed the Cassini Equinox Mission. This time period also will allow for monitoring seasonal effects on Titan and Saturn, exploring new places within Saturn's magnetosphere, and observing the unique ring geometry of the Saturn equinox in August of 2009 when sunlight will pass directly through the plane of the rings.

"We've had a wonderful mission and a very eventful one in terms of the scientific discoveries we've made, and yet an uneventful one when it comes to the spacecraft behaving so well," said Bob Mitchell, Cassini program manager at NASA's Jet Propulsion Laboratory, Pasadena, Calif. "We are incredibly proud to have completed all of the objectives we set out to accomplish when we launched. We answered old questions and raised quite a few new ones and so our journey continues." 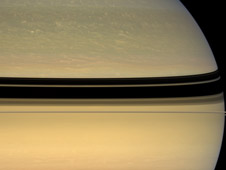 New hues are creeping into Saturn's northern cloud bands as winter gives way to spring there. Image credit: NASA/JPL/Space Science Institute
›  Full image and caption A new addition to the Cassini science team is Bob Pappalardo who will step into the role of Cassini Project Scientist in July, taking over for Dennis Matson, a multi-year veteran on the project who will be working on future flagship mission studies to the outer solar system. "I am honored and humbled to be able to work with such a scientifically rich mission, and with the outstanding scientists and engineers who are the backbone of Cassini," said Pappalardo.

Pappalardo is a geologist whose research focuses on processes that have shaped the icy moons of the outer solar system, including processes that power the geysers of Saturn's moon Enceladus. He received his bachelor's degree from Cornell University, Ithaca, N.Y., and his Ph.D. in geology from Arizona State University, Tempe. He worked with the Galileo imaging team while a Postdoctoral Researcher at Brown University, Providence, RI. Prior to joining JPL in 2006, he was an assistant professor of planetary sciences at the University of Colorado at Boulder. Currently he resides in Venice, Calif. More information on Pappalardo is at http://science.jpl.nasa.gov/people/Pappalardo.

Information about the Cassini Equinox Mission is at http://www.nasa.gov/cassini and http://saturn.jpl.nasa.gov.

The Cassini Equinox Mission is a cooperative project of NASA, the European Space Agency and the Italian Space Agency. The Jet Propulsion Laboratory, a division of the California Institute of Technology in Pasadena, manages the mission for NASA's Science Mission Directorate, Washington, D.C. The Cassini orbiter was designed, developed and assembled at JPL. Media contacts: Carolina Martinez 818-354-9382
Jet Propulsion Laboratory, Pasadena, Calif.
Carolina.Martinez@jpl.nasa.gov