Students Chosen as Cassini Scientists for a Day 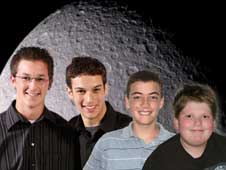 Contest participants had to choose one of three target areas for Cassini's camera: Saturn's moon Enceladus, Rhea, or a section of Saturn's rings that includes the tiny moon Pan. The students had to write an essay explaining why their chosen snapshot would yield the most scientific rewards, and the winners were invited to discuss their essays with Cassini scientists via teleconference.

The essays were judged by a panel of Cassini scientists, mission planners, and the education and outreach team at NASA's Jet Propulsion Laboratory, Pasadena, Calif.

This year's winners are located in Pennsylvania, Massachusetts and Michigan. Their essays were chosen from 197 essays written by fifth-to-twelfth-grade students across the United States.

Michael Keefe, an eighth-grader from Scituate, Mass., and the winner in the 7th-to-8th-grade category, chose Rhea.

"A photograph of Rhea would not just give us clues about what forces are at work upon it, but also what forces have worked on other satellites," Keefe wrote in his essay.

Matt Pleatman and Noah Van Valkenburg, 11th-grade students from Bloomfield Hills, Mich., and the winners in the 9th-to-12th-grade division, also chose Rhea for their joint essay, writing "What better moon to study than the one discovered by Cassini himself?"

Ben Basalik, a 6th-grade student from Collegeville, Penn., and the winner in the 5th-to-6th-grade category, chose Enceladus, Saturn's geologically active moon. Cassini has discovered Yellowstone-like geysers spewing from its surface.

"This moon is unusual because it reflects almost 100 percent of the sunlight that strikes it and although it is cold, it has many features that suggest that it is generating heat," Basalik wrote in his essay.