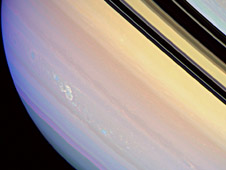 An enhanced color view of the storm on Saturn. Image credit: NASA/JPL/Space Science Institute
›  Full image and caption
›  Related image
›  Storm sound: This audio of a 2006 storm is similar to the current storm.
PASADENA, Calif. – As a powerful electrical storm rages on Saturn with lightning bolts 10,000 times more powerful than those found on Earth, the Cassini spacecraft continues its five-month watch over the dramatic events.

Lightning flashes within the persistent storm produce radio waves called Saturn electrostatic discharges, which the radio and plasma wave science instrument first detected on Nov. 27, 2007. Cassini's imaging cameras monitored the position and appearance of the storm, first spotting it about a week later, on Dec. 6.

"The electrostatic radio outbursts have waxed and waned in intensity for five months now," said Georg Fischer, an associate with the radio and plasma wave science team at the University of Iowa, Iowa City. "We saw similar storms in 2004 and 2006 that each lasted for nearly a month, but this storm is longer-lived by far. And it appeared after nearly two years during which we did not detect any electrical storm activity from Saturn."

The new storm is located in Saturn's southern hemisphere--in a region nicknamed "Storm Alley" by mission scientists--where the previous lightning storms were observed by Cassini. "In order to see the storm, the imaging cameras have to be looking at the right place at the right time, and whenever our cameras see the storm, the radio outbursts are there," said Ulyana Dyudina, an associate of the Cassini imaging team at the California Institute of Technology in Pasadena, Calif.

Cassini's radio plasma wave instrument detects the storm every time it rotates into view, which happens every 10 hours and 40 minutes, the approximate length of a Saturn day. Every few seconds the storm gives off a radio pulse lasting for about a tenth of a second, which is typical of lightning bolts and other electrical discharges. These radio waves are detected even when the storm is over the horizon as viewed from Cassini, a result of the bending of radio waves by the planet's atmosphere.

Amateur astronomers have kept track of the storm over its five-month lifetime. "Since Cassini's camera cannot track the storm every day, the amateur data are invaluable," said Fischer. "I am in continuous contact with astronomers from around the world."

The long-lived storm will likely provide information on the processes powering Saturn's intense lightning activity. Cassini scientists will continue to monitor Storm Alley as the seasons change, bringing the onset of autumn to the planet’s southern hemisphere.

The Cassini-Huygens mission is a cooperative project of NASA, the European Space Agency and the Italian Space Agency. JPL, a division of Caltech, manages the Cassini mission for NASA's Science Mission Directorate, Washington, D.C. The Cassini orbiter and its two onboard cameras were designed, developed and assembled at JPL. The imaging team is based at the Space Science Institute, Boulder, Colo. The radio and plasma wave science team is based at the University of Iowa, Iowa City.