Cassini Spacecraft to Dive Into Water Plume of Saturn Moon 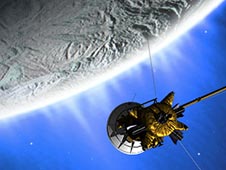 The spacecraft, orchestrating its closest approach to date, will skirt along the edges of huge Old-Faithful-like geysers erupting from giant fractures on the south pole of Enceladus. Cassini will sample scientifically valuable water-ice, dust and gas in the plume.

"This daring flyby requires exquisite technical finesse, but it has the potential to revolutionize our knowledge of the geysers of Enceladus. The Cassini mission team is eager to see the scientific results, and so am I," said Alan Stern, associate administrator of NASA's Science Mission Directorate, Washington. 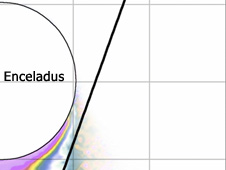 This graphic shows the trajectory for the Cassini spacecraft during its close brush with the icy outpost of Enceladus on March 12, 2008. Image credit: NASA/JPL
› Larger image
› Interactive feature Scientists and mission personnel studying the anatomy of the plumes have found that flying at these close distances poses little threat to Cassini because, despite the high speed of Cassini, the plume particles are small. The spacecraft routinely crosses regions made up of dust-size particles in its orbit around Saturn.

Images will reveal northern regions of the moon previously not captured by Cassini. The analyzers will "sniff and taste" the plume. Information on the density, size, composition and speed of the gas and the particles will be collected.

"There are two types of particles coming from Enceladus, one pure water-ice, the other water-ice mixed with other stuff," said Sascha Kempf, deputy principal investigator for Cassini's Cosmic Dust Analyzer at the Max Planck Institute for Nuclear Physics in Heidelberg, Germany. "We think the clean water-ice particles are being bounced off the surface and the dirty water-ice particles are coming from inside the moon. This flyby will show us whether this concept is right or wrong."

In 2005, Cassini's multiple instruments discovered that this icy outpost is gushing water vapor geysers out to a distance of three times the radius of Enceladus. The moon is only 500 kilometers (310 miles) in diameter, but despite its petite size, it’s one of the most scientifically compelling bodies in our solar system. The icy water particles are roughly one ten-thousandth of an inch, or about the width of a human hair. The particles and gas escape the surface at jet speed at approximately 400 meters per second (800 miles per hour). The eruptions appear to be continuous, refreshing the surface and generating an enormous halo of fine ice dust around Enceladus, which supplies material to one of Saturn's rings, the E-ring.

Several gases, including water vapor, carbon dioxide, methane, perhaps a little ammonia and either carbon monoxide or nitrogen gas make up the gaseous envelope of the plume.

"We want to know if there is a difference in composition of gases coming from the plume versus the material surrounding the moon. This may help answer the question of how the plume formed," said Hunter Waite, principal investigator for Cassini's Ion and Neutral Mass Spectrometer at the Southwest Research Institute, San Antonio.

This is the first of four Cassini flybys of Enceladus this year. In June, Cassini completes its prime mission, a four-year tour of Saturn. Cassini's next flyby of Enceladus is planned for August, well into Cassini's proposed extended mission. Cassini will perform seven Enceladus flybys in its extended mission. If this encounter proves safe, future passes may bring the spacecraft even closer than this one. How close Cassini will be allowed to approach will be determined based on data from this flyby.

For images, videos and a mission blog on the flyby, visit: http://www.nasa.gov/cassini . More information on the Cassini mission is also available at http://saturn.jpl.nasa.gov .