These clumps in Saturn's B ring are neatly organized and constantly colliding, which surprised scientists. 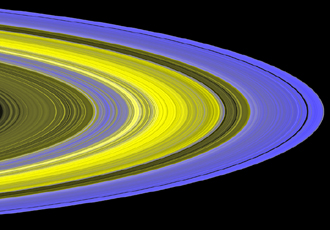 "The rings are different from the picture we had in our minds. We originally thought we would see a uniform cloud of particles. Instead we find that the particles are clumped together with empty spaces in between," said Larry Esposito, principal investigator for the Cassini ultraviolet imaging spectrograph at the University of Colorado, Boulder. "If you were flying under Saturn's rings in an airplane, you would see these flashes of sunlight come through the gaps, followed by dark and so forth. This is different from flying under a uniform cloud of particles."

Because previous interpretations assumed the ring particles were distributed uniformly, scientists underestimated the total mass of Saturn's rings. The mass may actually be two or more times previous estimates.

"These results will help us understand the overall question of the age and hence the origin of Saturn's rings," said Josh Colwell, assistant professor of physics at the University of Central Florida, Orlando, and a team member of the Cassini ultraviolet imaging spectrograph. A paper with these results appears in the journal Icarus.

Scientists observed the brightness of a star as the rings passed in front of the star on multiple occasions. This provided a measurement of the amount of ring material between the spacecraft and the star.

"Combining many of these occultations at different viewing geometries is like doing a CAT scan of the rings," said Colwell. "By studying the brightness of stars as the rings pass in front of them, we are able to map the ring structure in 3-D and learn more about the shape, spacing and orientation of clusters of particles."

The observations confirm that the gravitational attraction of ring particles to each other creates clumps, or "self-gravity wakes." If the clumps were farther from Saturn, they might continue to grow into a moon. But because these clumps are so close to Saturn, their different speeds around the planet counteract this gravitational attraction so that the clumps get stretched like taffy and pulled apart. The clumps are constantly forming and coming apart once they reach about 30 to 50 meters (about 100 to 160 feet) across.

"At any given time, most particles are going to be in one of the clumps, but the particles keep moving from clump to clump as clumps are destroyed and new ones are formed," added Colwell.

In the dense B ring, the classical cloud model of the rings predicted that particles collide about twice per hour on average. "Our results show that the particles in the B ring spend most of their time in almost continuous contact with other particles," said Colwell. These clumps may act like super-sized particles, changing the way the rings spread due to collisions.

The clumps are seen in all regions of the B ring that are not opaque. One surprising aspect of the measurements is that the clumps in the B ring are broad and very flat, like big sheets of particles. They are roughly 10 to 50 times wider than they are thick. Scientists are also surprised that the B ring clumps are flatter and have smaller spaces between them than those found in the neighboring A ring.

A picture of the rings based on these results is available at: http://www.nasa.gov/cassini, http://saturn.jpl.nasa.gov and http://lasp.colorado.edu/cassini/whats_new/.

The Cassini-Huygens mission is a cooperative project of NASA, the European Space Agency and the Italian Space Agency. The Jet Propulsion Laboratory, a division of the California Institute of Technology in Pasadena, manages the Cassini-Huygens mission for NASA's Science Mission Directorate, Washington. The Cassini orbiter was designed, developed and assembled at JPL. The ultraviolet imaging spectrograph was built at, and the team is based at the University of Colorado, Boulder.