Cassini Spacecraft Images Seas on Saturn's Moon Titan
Instruments on NASA's Cassini spacecraft have found evidence for seas, likely filled with liquid methane or ethane, in the high northern latitudes of Saturn's moon Titan. One such feature is larger than any of the Great Lakes of North America and is about the same size as several seas on Earth.

Cassini's radar instrument imaged several very dark features near Titan's north pole. Much larger than similar features seen before on Titan, the largest dark feature measures at least 100,000 square kilometers (39,000 square miles). Since the radar has caught only a portion of each of these features, only their minimum size is known. Titan is the second largest moon in the solar system and is about 50 percent larger than Earth's moon. 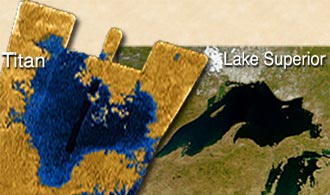 "We've long hypothesized about oceans on Titan and now with multiple instruments we have a first indication of seas that dwarf the lakes seen previously," said Dr. Jonathan Lunine, Cassini interdisciplinary scientist at the University of Arizona, Tucson.

While there is no definitive proof yet that these seas contain liquid, their shape, their dark appearance in radar that indicates smoothness, and their other properties point to the presence of liquids. The liquids are probably a combination of methane and ethane, given the conditions on Titan and the abundance of methane and ethane gases and clouds in Titan's atmosphere.

Cassini's visual and infrared mapping spectrometer also captured a view of the region, and the team is working to determine the composition of the material contained within these features to test the hypothesis that they are liquid-filled.

The imaging cameras, which provide a global view of Titan, have imaged a much larger, irregular dark feature. The northern end of their image corresponds to one of the radar-imaged seas. The dark area stretches for more than 1,000 kilometers (620 miles) in the image, down to 55 degrees north latitude. If the entire dark area is liquid-filled, it would be only slightly smaller than Earth's Caspian Sea. The radar data show details at the northern end of the dark feature similar to those seen in earlier radar observations of much smaller, liquid-filled lakes. However, to determine if the entire dark feature is a liquid-filled basin will require investigation through additional radar flyovers later in the mission. 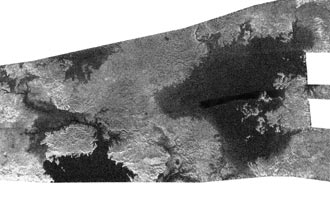 Image left: This image is a portion of a larger view of Titan that features some of the largest bodies of liquid ever seen. The lake on the far right is larger than any lake on Earth and could be legitimately called a sea. Image credit: NASA/JPL
+ Full image and caption

The presence of these seas reinforces current thinking that Titan's surface must be re-supplying methane to its atmosphere, the original motivation almost a quarter century ago for the theoretical speculation of a global ocean on Titan.

Cassini's instruments are peeling back the haze that shrouds Titan, showing high northern latitudes dotted with seas hundreds of miles across, and hundreds of smaller lakes that vary from several to tens of miles.

Due to the new discoveries, team members are re-pointing Cassini's radar instrument during a May flyby so it can pass directly over the dark areas imaged by the cameras.