A Hot Start Might Explain Geysers on Enceladus
A hot start billions of years ago might have set into motion the forces that power geysers on Saturn's moon Enceladus.

"Deep inside Enceladus, our model indicates we've got an organic brew, a heat source and liquid water, all key ingredients for life," said Dr. Dennis Matson, Cassini project scientist at NASA's Jet Propulsion Laboratory, Pasadena, Calif. "And while no one is claiming that we have found life by any means, we probably have evidence for a place that might be hospitable to life." 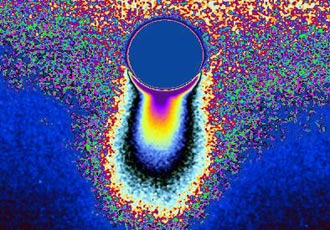 Since NASA's Voyager spacecraft first returned images of the moon's snowy white surface, scientists have suspected Enceladus had to have something unusual happening within that shell. Cameras on NASA's Cassini orbiter seemed to confirm that suspicion in 2005 when they spotted geysers on Enceladus ejecting water vapor and ice crystals from its south polar region. The challenge for researchers has been to figure out how this small ice ball could produce the levels of heat needed to fuel such eruptions.

A new model suggests the rapid decay of radioactive elements within Enceladus shortly after it formed may have jump-started the long-term heating of the moon's interior that continues today. The model provides support for another recent, related finding, which indicates that Enceladus' icy plumes contain molecules that require elevated temperatures to form.

"Enceladus is a very small body, and it's made almost entirely of ice and rock. The puzzle is how the moon developed a warm core," said Dr. Julie Castillo, the lead scientist developing the new model at JPL. "The only way to achieve such high temperatures at Enceladus is through the very rapid decay of some radioactive species."

The hot start model suggests Enceladus began as a mixed-up ball of ice and rock that contained rapidly decaying radioactive isotopes of aluminum and iron. The decomposition of those isotopes - over a period of about 7 million years - would produce enormous amounts of heat. This would result in the consolidation of rocky material at the core surrounded by a shell of ice. According to the theory, the remaining, more slowly decaying radioactivity in the core could continue to warm and melt the moon's interior for billions of years, along with tidal forces from Saturn's gravitational tug.

Scientists have also found the model helpful in explaining how Enceladus might have produced the chemicals in the plume, as measured by Cassini's ion and neutral mass spectrometer. Matson is lead author of a new study of the plume's composition, which appears in the April issue of the journal Icarus. Although the plume is predominantly made up of water vapor, the spectrometer also detected within the plume minor amounts of gaseous nitrogen, methane, carbon dioxide, propane and acetylene.

Scientists were particularly surprised by the nitrogen because they don't think it could have been part of Enceladus' original makeup. Instead, Matson's team suggests it is the product of the decomposition of ammonia deep within the moon, where the warm core and surrounding liquid water meet. 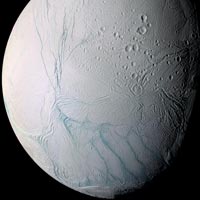 The thermal decomposition of ammonia would require temperatures as high as 577 degrees Celsius (1070 degrees Fahrenheit), depending on whether catalysts such as clay minerals are present. And while the long-term decay of radioactive species and current tidal forces alone cannot account for such high temperatures, with the help of the hot start model, they can.

The scalding conditions are also favorable for the formation of simple hydrocarbon chains, basic building blocks of life, which Cassini's spectrometer detected in small amounts within Enceladus' plume. The team concludes that so far, all the findings and the hot start model indicate that a warm, organic-rich mixture was produced below the surface of Enceladus and might still be present today, making the moon a promising kitchen for the cooking of primordial soup.

To gather more information about the chemistry within Enceladus, the team plans to directly measure the gas emanating from the plume during a flyby scheduled for March 2008.

For images and information about the Cassini mission, visit: http://www.nasa.gov/cassini and http://saturn.jpl.nasa.gov .