NASA Finds Saturn's Moons May be Creating New Rings
Cassini scientists are on the trail of the missing moons of Saturn. A recent observation by the spacecraft leads them to believe that they will find the moons near newly discovered rings around the planet.

During an unprecedented opportunity, with the sun poised behind Saturn, Cassini scientists discovered two new rings and confirmed the presence of two others. The new rings are associated with one or more small moons and share their orbits with the moons, while scientists suspect a moon is lurking near a third ring. 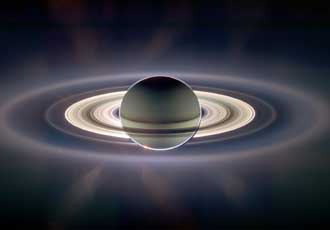 Image right: With giant Saturn hanging in the blackness and sheltering Cassini from the sun's blinding glare, the spacecraft viewed the rings as never before, revealing previously unknown faint rings and even glimpsing its home world.Image credit: NASA/JPL/Space Science Institute.
+ Full image and caption

Under the cover of Saturn's shadow in mid-September, the entire ring system became visible, and never-before-seen microscopic particles began to appear. A single, faint new ring at the orbits of two moonlets, Janus and Epimetheus, was discovered. A second ring was found a week later. It is narrow and overlies the orbit of the tiny moon Pallene, which Cassini discovered back in 2004. A third and fourth ring are visible in the Cassini Division, the big gap in Saturn's main ring system. Curiously, these rings were not seen in images from NASA's Voyager spacecraft.

"We are hot on the trail of these possible elusive moonlets," said Dr. Joe Burns, Cassini imaging scientist at Cornell University, Ithaca, N.Y. "Finding the moons and learning about their interactions with the rings will help us understand how the moons formed and perhaps how the Saturn system formed."

When viewed by Cassini's infrared instrument, one of the rings in the Cassini Division has unusual coloring and brightening, a trait it shares with fresh, faint rings like the F ring, or those in the Encke Gap in Saturn's outer A ring.

Saturn's smallest moons have weak gravity and cannot retain any loose material on their surfaces. When these moons are struck by rapidly moving interplanetary meteoroids, this loose material is blasted off their surfaces and into Saturn orbit, creating diffuse rings along the moons' orbital paths. Collisions among several moonlets, or clumps of boulder-sized rubble, might also lead to debris trails. For instance, Saturn's G ring seems not to have any single moon large enough to see; it might have formed from a recent breakup of a moon.

The unusual viewing geometry provided other insights into the changing nature of Saturn's rings. In addition to the dazzling images, data from Cassini's visual and infrared mapping spectrometer also show distinct color differences, indicating variations in composition and in microscopic particles in the Cassini Division, the diffuse E- and G-rings, lying outside the main rings, and the D ring, which is the ring closest to Saturn.

"These tiny grains are like spices -- even a little bit of material can alter the ring's character," said Dr. Matt Hedman, another Cassini scientist at Cornell. Color variation in the rings might imply particles are being sorted by size.

"We expected to see things we haven't seen before, but we are really, really puzzled by these new images of Saturn's main ring system," said Dr. Phil Nicholson, of Cornell, Cassini visual and infrared spectrometer team member. "The rings appear very different, with none of their usual calling card of water-ice features. There are hints that other material besides ice might finally be detected within the rings."

"The main rings show a neutral color, while the C ring is reddish, and the D and E rings are quite blue," added Nicholson. "We don't quite understand if these variations are due to differences in particle size or composition, but it's nice to be surprised every once in a while."

The latest Cassini findings are being presented today at the Division for Planetary Sciences Meeting of the American Astronomical Society held in Pasadena, Calif. Images to support this release, including an infrared mosaic and visible light mosaic of Saturn, can be found at http://www.nasa.gov/cassini , http://saturn.jpl.nasa.gov and http://ciclops.org .

The Cassini-Huygens mission is a cooperative project of NASA, the European Space Agency and the Italian Space Agency. The Jet Propulsion Laboratory, a division of the California Institute of Technology in Pasadena, manages the Cassini-Huygens mission for NASA’s Science Mission Directorate, Washington. The Cassini orbiter and its two onboard cameras were designed, developed and assembled at JPL. The imaging team is based at the Space Science Institute, Boulder, Colo. The visual and infrared mapping spectrometer team is based at the University of Arizona, Tucson.