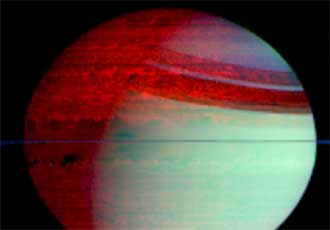 Because upper-level hazes and clouds obscure the view of these deep clouds in visible light, imaging clouds in the depths of Saturn is not practical using visible-light cameras. Several recent images obtained by Cassini's visual and infrared mapping spectrometer were combined in a way that highlights the deep clouds in silhouette against the background radiation of heat generated by Saturn's interior. This literally lights the planet from the inside, like a lantern.

The image, produced by team members at the University of Arizona, Tucson, is available at: http://www.nasa.gov/cassini http://saturn.jpl.nasa.gov , and http://wwwvims.lpl.arizona.edu .

The Cassini-Huygens mission is a cooperative project of NASA, the European Space Agency and the Italian Space Agency. The Jet Propulsion Laboratory, a division of the California Institute of Technology in Pasadena, manages the Cassini-Huygens mission for NASA's Science Mission Directorate, Washington. The Cassini orbiter was designed, developed and assembled at JPL. The visual and infrared mapping spectrometer team is based at the University of Arizona.