These radar images, from a strip more than 4,500 kilometers (2,796 miles) long, show Xanadu is surrounded by darker terrain, reminiscent of a free-standing landmass. At the region's western edge, dark sand dunes give way to land cut by river networks, hills and valleys. These narrow river networks flow onto darker areas, which may be lakes. A crater formed by the impact of an asteroid or by water volcanism is also visible. More channels snake through the eastern part of Xanadu, ending on a dark plain where dunes, abundant elsewhere, seem absent. Appalachian-sized mountains crisscross the region. 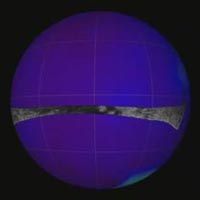 "We could only speculate about the nature of this mysterious bright country, too far from us for details to be revealed by Earth-based and space-based telescopes. Now, under Cassini's powerful radar eyes, facts are replacing speculation," said Dr. Jonathan Lunine, Cassini interdisciplinary scientist at the University of Arizona, Tucson. "Surprisingly, this cold, faraway region has geological features remarkably like Earth."

Titan is a place of twilight, dimmed by a haze of hydrocarbons surrounding it. Cassini's radar instrument can see through the haze by bouncing radio signals off the surface and timing their return. In the radar images, bright regions indicate rough or scattering material, while a dark region might be smoother or more absorbing material, possibly liquid.

Xanadu was first discovered by NASA's Hubble Space Telescope in 1994 as a striking bright spot seen in infrared imaging. When Cassini's radar system viewed Xanadu on April 30, 2006, it found a surface modified by winds, rain, and the flow of liquids. At Titan's frigid temperatures, the liquid cannot be water; it is almost certainly methane or ethane. 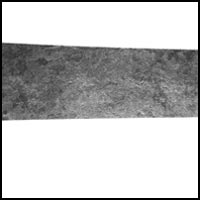 "Although Titan gets far less sunlight and is much smaller and colder than Earth, Xanadu is no longer just a mere bright spot, but a land where rivers flow down to a sunless sea," Lunine said.

Observations by the European Space Agency's Huygens probe, which Cassini carried to Titan, and by NASA's Voyager spacecraft strongly hint that both methane rain and dark orange hydrocarbon solids fall like soot from the moon's dark skies.

On Xanadu, liquid methane might fall as rain or trickle from springs. Rivers of methane might carve the channels and carry off grains of material to accumulate as sand dunes elsewhere on Titan.

"This land is heavily tortured, convoluted and filled with hills and mountains," said Steve Wall, the Cassini radar team's deputy leader at NASA's Jet Propulsion Laboratory, Pasadena, Calif. "There appear to be faults, deeply cut channels and valleys. Also, it appears to be the only vast area not covered by organic dirt. Xanadu has been washed clean. What is left underneath looks like very porous water ice, maybe filled with caverns."

"In the 1980s, it took the shuttle imaging radar to discover subsurface rivers in the Sahara. Similarly, if it hadn't been for the Cassini radar, we would have missed all of this. We have a newly discovered continent to explore," Wall said. 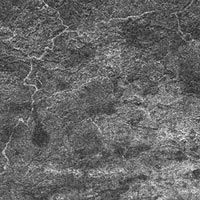 Cassini will view Titan again on Saturday, July 22, exploring the high northern latitudes. In the next two years the orbiter will fly by Titan 29 times, nearly twice as many encounters as in the first half of Cassini's four-year prime mission. Twelve of the planned flybys will use radar.