NASA's Cassini Spacecraft Marks Mission Halfway Point
As the Cassini spacecraft reaches the halfway mark in its four-year tour of the Saturn system, discoveries made during the first half of the mission have scientists revved up to find out what's in store for the second act. Cassini has been orbiting Saturn since June 30, 2004, studying the planet, its rings and moons. 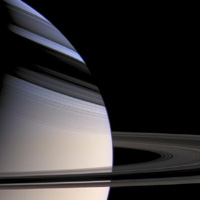 "The spacecraft has spent a considerable amount of time studying the moon Titan during 15 separate flybys so far. In the second half of its prime mission, ending June 2008, Cassini will swing by Titan 30 more times," said Robert T. Mitchell, Cassini program manager at NASA's Jet Propulsion Laboratory, Pasadena, Calif. "The past two years have been just like a warm-up."

"We especially focused on Titan because we thought it could tell us something about the early Earth," said Dr. Toby Owen, Cassini interdisciplinary scientist at the University of Hawaii at Manoa.

Owen added, "Examining this world frozen in time, we find evidence that Earth may have begun with the same methane-ammonia atmosphere that marked the birth of Titan. Because of our world's closeness to the Sun, Earth has oceans of liquid water, which Titan lacks. The resulting chemistry in Earth's warm environment ultimately led to the origin of life, whereas on Titan we find only a frozen echo of early Earth: methane, nitrogen, and a suite of small organic molecules. Our planet's carefully balanced, warm global climate is the underlying reason that we are investigating Titan, instead of Titanians investigating Earth."

Cassini's tour of the Saturnian system is about to take on a new pace. "This summer we will begin our express-ticket ride. That's 11 months with 17 Titan encounters and 51 spacecraft maneuvers to adjust the flight path, more than one maneuver per week," said Jerry Jones, Cassini chief navigator at JPL. The first of these encounters will be a Titan flyby on July 2, followed by the closest Titan encounter yet on July 22, at 950 kilometers (590 miles) above the surface.

Later in July, navigators will begin to flip the spacecraft's orbit orientation with respect to the sun by nearly 180 degrees, resulting in a bird's-eye view of Saturn's glorious rings. This gradual transfer will take about one year. "One of the biggest mysteries confronting Cassini is the changes we've seen in Saturn's radio emissions" said Dr. Bill Kurth, Cassini scientist at the University of Iowa, Iowa City. "We've seen the radio period, the frequency of emissions that tell scientists how fast or slow the planet is rotating, change by as much as one percent (or a few minutes) over just 10 years, and we don't know why. Pinning down how long the day is on Saturn is key to understanding other things, such as wind speed."

Cassini has quite a job to do during the second half of the mission to match the potpourri of discoveries in its first half.

The wealth of information from the Cassini spacecraft and the European Space Agency's Huygens probe, which descended through Titan's murky atmosphere to its surface, shows that Titan is remarkably Earth-like. There is evidence for methane rain, erosion, drainage channels, dry lake beds, possible volcanoes and vast dune fields that run for miles.

In addition to the Titan findings, Cassini also discovered three new moons, and some of the previously-known moons provided surprises. One of the most bizarre discoveries is a giant mountain range that runs the full length around the equator of Saturn's moon Iapetus. The mountains rival Olympus Mons on Mars, which is nearly three times the height of Mt. Everest. Other moons look like rubble piles.

Cassini also acquired the highest resolution images ever taken of the planet's rings. Strange structures in the rings became apparent on the first day of the tour. Waves rip through the rings, while knots and banded structures shape them. Clumps of ice several kilometers wide are now appearing.

Scientists also witnessed moons influencing the rings. The moon Prometheus was caught stealing particles from the F-ring, while Enceladus seems to be contributing particles to Saturn's expansive E-ring. A whole new class of small moonlets may lie within Saturn's rings. New rings have also appeared, which may indicate the presence of tiny moonlets.

The true showstopper was the discovery of giant, icy geysers gushing from the surface of Enceladus. This evidence leads some scientists to believe there may be liquid water close to the surface.

With all these discoveries in the first two years, it's little wonder Cassini scientists are anxiously waiting to see what else remains for their instruments to reveal in the next two years.