NASA and Partners Release New Movies Of Titan
New views of the most distant touchdown ever made by a spacecraft are being released today by NASA, the European Space Agency and the University of Arizona. The movies show the dramatic descent of the Huygens probe to the surface of Saturn's moon Titan on Jan. 14, 2005. 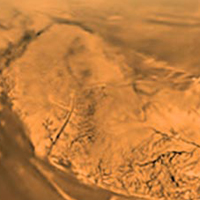 Image right: This image of Saturn's moon Titan was taken by the European Space Agency's Huygens probe during its descent on Jan. 14, 2005. Image credit: ESA/NASA/JPL/University of Arizona
+ Full image and caption
+ Browse version of image
+ Video: View from Huygens
+ Video: Descent with bells and whistles

The data were analyzed for months after the landing and represent the best visual product obtained from the Huygens mission. It is the most realistic way yet to experience the Huygens probe landing. The movie "View from Huygens on Jan. 14, 2005," provides in 4 minutes and 40 seconds of what the probe actually "saw" during the 2.5 hours of the descent and touchdown.

"At first, the Huygens camera just saw fog over the distant surface," said Erich Karkoschka, team member at the University of Arizona, Tucson, and creator of the movies. "The fog started to clear only at about 60 kilometers [37 miles] altitude, making it possible to resolve surface features as large as 100 meters [328 feet]," he said. "But only after landing could the probe's camera resolve little grains of sand millions and millions of times smaller than Titan. A movie is a perfect medium to show such a huge change of scale."

For the second movie, scientists used artistic license and added sound to represent the different data sets collected. They re-created a scientifically accurate representation of the mission life in less than five minutes.

"These movies really demonstrate that the Huygens camera was very well designed for the job," said Jean-Pierre Lebreton, Huygens project scientist and mission manager at the European Space Agency. "They show so many different details of a landscape that covers only a tiny fraction -- one-thousandth -- of Titan's surface. This makes me dream of what a possible future mission to Titan may return of this wonderful and fascinating Earth-like world," he said.

The Huygens probe was delivered to Saturn's moon Titan by the Cassini spacecraft, which is managed by NASA's Jet Propulsion Laboratory, Pasadena, Calif. NASA supplied two instruments on the probe, the Descent Imager/Spectral Radiometer and the Gas Chromatograph Mass Spectrometer.

The Cassini spacecraft continues orbiting Saturn in its second year of its four-year tour. Cassini's next Titan flyby is on May 20, 2006. Twenty-two flybys of Titan are planned this year by Cassini, with 45 total flybys of Titan in the full tour.

The Cassini-Huygens mission to Saturn and Titan is a joint mission of NASA, the European Space Agency and the Italian Space Agency. ESA supplied and manages the Huygens probe that descended to Titan's surface. NASA's Jet Propulsion Laboratory, a division of the California Institute of Technology in Pasadena, manages the mission for NASA's Science Mission Directorate in Washington. NASA funded the Descent Imager/Spectral Radiometer, which was built by Lockheed Martin. University of Arizona Lunar and Planetary Laboratory scientist Martin Tomasko leads the Descent Imager/Spectral Radiometer team. Team members are based throughout the United States and Europe. Media contacts:
Carolina Martinez (818) 354-9382
Jet Propulsion Laboratory, Pasadena, Calif.