Cassini Shows Before and After Look at Saturn's Moon Titan
Cassini's second close flyby of Titan completes a 'before' and 'after' look at the fuzzy moon and provides the first direct evidence of changing weather patterns in the skies over Titan. 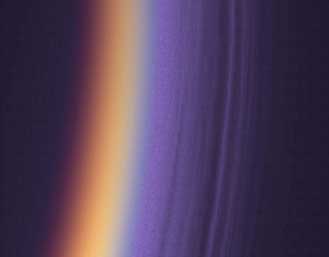 Image right: Cassini has found Titan's upper atmosphere to consist of a surprising number of layers of haze, as shown in this ultraviolet image of Titan's night side limb, colorized to look like true color.Click for full image/caption.

In images obtained less than two months ago, the Titan skies were cloud free, except for a patch of clouds observed over the moon's south pole. In images taken Monday, Dec. 13, during Cassini's second close flyby of Titan, several extensive patches of clouds have formed.

"We see for the first time discrete cloud features at mid- latitudes, which means we see direct evidence of weather, and we can get wind speeds and atmospheric circulation over a region we hadn't been able to measure before," said Dr. Kevin Baines, Cassini science-team member with the visual and infrared mapping spectrometer, from NASA's Jet Propulsion Laboratory, Pasadena, Calif.

The latest data and other results from Cassini's close observations of Saturn's moons Titan and Dione were presented today at a news conference during the American Geophysical Union fall meeting in San Francisco.

Cassini swept within 1,200 kilometers (750 miles) of Titan's surface on Monday, and took a close look at the icy moon Dione just one day later. During the flyby, Cassini captured a stunning view of Titan's night side with the atmosphere shimmering in its own glow. This allows scientists to study the detached haze layers, which extend some 400 kilometers (249 miles) above Titan. 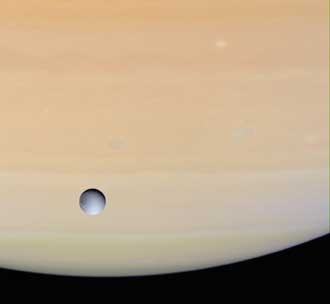 Image left: Cassini captured Dione against the globe of Saturn as it approached the icy moon for its close rendezvous on Dec. 14, 2004. Click for full image/caption.

Images from Cassini's cameras show regions on Titan that had not been seen clearly before, as well as fine details in Titan's intermittent clouds. The surface features may be impact related, but without information on their height, it is too soon to know for sure. No definitive craters have been seen in these images, though several bright rings or circular features are seen in dark terrain.

Cassini imaging scientists are intrigued by the complex braided structure of surface fractures on Dione. To the surprise of scientists, the wispy terrain features do not consist of thick ice deposits, but bright ice cliffs created by tectonic features. "This is one of the most surprising results so far. It just wasn't what we expected," said Dr. Carolyn Porco, Cassini imaging team leader, Space Science Institute, Boulder, Colo.

Other Cassini results presented at the meeting included observations made by the ultraviolet imaging spectrograph instrument, which indicates that the nearby environment of the rings and moons in the Saturn system is filled with ice, and atoms derived from water. Cassini researchers are seeing large changes in the amount of oxygen atoms in the Saturn system. A possible explanation for the fluctuation in oxygen is that small, unseen icy moons have been colliding with Saturn's E ring," said Dr. Larry Esposito, principal investigator of the imaging spectrograph instrument, University of Colorado, Boulder, Colo. "These collisions may have produced small grains of ice, which yielded oxygen atoms." Esposito presented these findings at the meeting, and a paper on the subject appears in the online version of the journal Science.

According to Esposito, Saturn's ring particles may have formed originally from pure ice. But they have since been subjected to continual bombardment by meteorites, which has contaminated the ice and caused the rings to darken. Over time, continuous meteorite bombardment has likely spread the dirty material resulting from the collisions over a wide area in the rings. "The evidence indicates that in the last 10 to 100 million years, fresh material probably was added to the ring system," said Esposito. These renewal events are from fragments of small moons, each probably about 20 kilometers (12 miles) across.

Images and more information about the Cassini mission are available at http://saturn.jpl.nasa.gov and http://www.nasa.gov/cassini.