Cassini Mission Status Report
The Cassini spacecraft completed a successful rendezvous with Saturn's moon Titan today. This was the last pass before the European Space Agency's Huygens probe is sprung loose from Cassini on Christmas Eve. Information gathered during this flyby will provide an opportunity to compare images from Cassini's first close Titan encounter on Oct. 26. 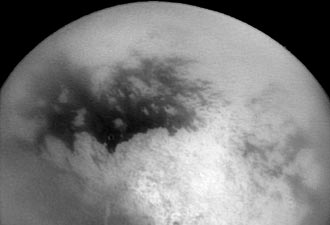 Image right: This image was taken on Dec. 11, 2004 by the Cassini spacecraft as it approached Titan for its second close encounter with this intriguing moon. The bright and dark regions near the center of the frame are features on Titan's surface. Image credit: NASA/JPL/Space Science Institute. Click for full image/caption.

As with the last flyby, a major goal of this flyby is to measure the thickness of Titan's atmosphere. This information will help determine whether Cassini can safely get closer to Titan on subsequent flybys, and will also be used to verify that Huygens atmosphere models are correct.

Titan is a prime target of the Cassini-Huygens mission because it is the only moon in our solar system with a thick smoggy atmosphere. The Huygens probe, built and operated by the European Space Agency, is attached to Cassini. After its Christmas Eve release, it will descend through Titan's atmosphere on Jan. 14, 2005, as it collects atmospheric data down to the surface.

Tomorrow morning, Cassini will fly by Saturn's icy moon Dione at a distance of 72,500 kilometers (45,000 miles). Images and science results from both flybys will be presented at a news conference that will take place on Thursday, Dec. 16, at the American Geophysical Union fall meeting in San Francisco. Reporters who wish to call in should call Carolina Martinez at (818) 354-9382.

The Cassini-Huygens mission is a cooperative project of NASA, the European Space Agency and the Italian Space Agency. The Jet Propulsion Laboratory, a division of the California Institute of Technology in Pasadena, manages the Cassini mission for NASA's Science Mission Directorate, Washington, D.C. JPL designed, developed and assembled the Cassini orbiter. The European Space Agency built and managed the development of the Huygens probe and is in charge of the probe operations. The Italian Space Agency provided the high-gain antenna, much of the radio system and elements of several of Cassini's science instruments.