Cassini Shows Grandeur of Two Saturn Moons
New views of two of Saturn's moons, Titan and Tethys, represent the most detailed look at these moons to date and show a sharp contrast between them -- one is foggy and one is cratered. 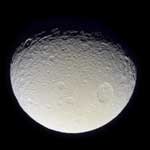 The Cassini spacecraft captured the puzzle pieces for the full-disc view of the mysterious Titan during its first close encounter on Oct. 26, 2004. The mosaic comprises nine images taken at distances ranging from 650,000 kilometers (400,000 miles) to 300,000 kilometers (200,000 miles).

The images that make up the mosaic were processed to reduce effects of the atmosphere and to sharpen surface features. The mosaic of images has been trimmed to show only the illuminated surface and not the atmosphere around the edge of the moon. The Sun was behind Cassini, so nearly the full disc was illuminated. South polar clouds are seen at the bottom. 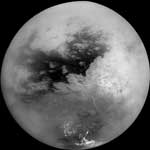 Surface features are best seen near the center of the moon. The surface features become fuzzier toward the outside of the image, where the spacecraft is peering through more haze. The brighter region on the right side near the equator is named Xanadu Regio. Scientists are debating what processes may have created the bizarre surface brightness patterns seen there. Titan's lack of obvious craters is a hint of a young surface. However, the exact nature of that activity, whether tectonic, wind-blown, river-related, marine or volcanic, is still unknown.

Two days after the close encounter with icy Titan, Cassini captured the images used in the mosaic of the battered and cratered moon Tethys. The result is the best-ever natural color view of Titan.

As seen here, the surface of Tethys has a neutral hue. Three images form this natural color composite. The mosaic reveals a world nearly saturated with craters -- many small craters lie on top of older, larger ones, suggesting an ancient surface. Grooves can be seen at the top and along the boundary between day and night.

Tethys is known to have a density very close to that of water, indicating that it is likely composed mainly of water ice. Its frozen mysteries await Cassini's planned close flyby in September 2005.

The images to create this mosaic were taken on Oct. 28, 2004, at a distance of about 256,000 kilometers (159,000 miles) from Tethys. This view shows the trailing hemisphere of Tethys, which is the side opposite the moon's direction of motion in its orbit.

Both images were taken with the narrow angle camera onboard the Cassini spacecraft. The Cassini-Huygens mission is a cooperative project of NASA, the European Space Agency and the Italian Space Agency. The Jet Propulsion Laboratory, a division of the California Institute of Technology in Pasadena, manages the Cassini-Huygens mission for NASA's Science Mission Directorate, Washington, D.C. The Cassini orbiter and its two onboard cameras were designed, developed and assembled at JPL. The imaging team is based at the Space Science Institute, Boulder, Colo.