Cassini Peeks Below Cloud Shroud Around Titan
Early analysis of images and other data captured during last night's close flyby of Saturn's moon Titan by the Cassini spacecraft reveals greater surface detail than ever before and shows that Titan has lost much of its original atmosphere over time.

"Titan has incredible diversity," said Dr. Dennis Matson, project scientist for the Cassini-Huygens mission at NASA's Jet Propulsion Laboratory, Pasadena, Calif. "We are glad that we have a full complement of instruments on this spacecraft because it is going to take all of them to reveal the story of Titan." 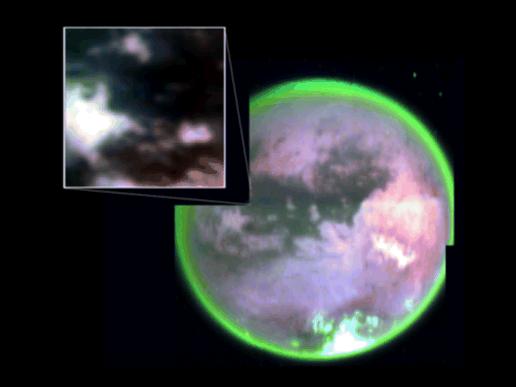 Pictures from the imaging cameras and the visual and infrared mapping spectrometer show a complex interplay between dark and bright material on Titan's surface. The surface appears to have been shaped by multiple geologic processes. Although a few circular features can be seen, none can be definitively identified as impact craters.

"We are seeing features and patterns on the surface, and there are processes creating these patterns, and that gives us something to chew on for a while," said Dr. Carolyn Porco, team leader for the imaging team, Space Science Institute, Boulder, Colo. "We can't figure out what the features are, but they are intriguing. This is an environment we have never seen before. It is a very different place and it will take some time to unravel and piece it all together."

Cassini scientists were intrigued that the spacecraft's ion and neutral mass spectrometer found that Titan's atmosphere has more of the heavy isotope of nitrogen, compared to the lighter form. They believe that when nitrogen molecules rose to the top of the atmosphere, the lighter form was swept away with greater efficiency than the heavier form.

Eleven of Cassini's 12 instruments were on during the flyby. Ten instruments returned data successfully. Engineers are working on a software glitch that caused the composite infrared spectrometer to malfunction. The team is confident that subsequent flybys of Titan will allow them to collect any data not gathered last night.

Cassini swooped down to within 1,174 kilometers (730 miles) of Titan during the close encounter. During the flyby, ground controllers were not in contact with the spacecraft, because it was turned away from Earth to make its observations. The signal was re-acquired as expected at 9:25 p.m. Eastern Daylight Time yesterday (6:25 p.m. Pacific Daylight Time).

Titan holds great fascination because it is the only known moon in the solar system to have an atmosphere. That murky atmosphere may be similar to that which existed on Earth before life formed. Cassini will become a frequent visitor to Titan, with 44 more targeted flybys planned during the mission. In addition, its piggybacked Huygens probe, built and managed by the European Space Agency, will be released on Christmas Eve for a descent into Titan's atmosphere.

"A major goal of this flyby was to measure the properties of Titan's atmosphere to see if our models to simulate the Huygens entry and descent are accurate, and to assess the feasibility of subsequent flybys at the 950 kilometer altitude [590 miles]," said Dr. Earl Maize, Cassini deputy program manager at JPL. "Preliminary data from last night's flyby are consistent with current predictions."

The latest information and images from Cassini are available at http://www.nasa.gov/cassini. Additional information on the mission and raw images are at http://saturn.jpl.nasa.gov .