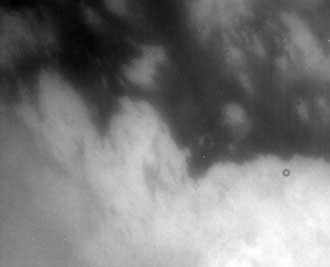 Image above: This image is one of the closest ever taken of Saturn's hazy moon Titan. It was captured by Cassini's imaging science subsystem on Oct. 26, 2004. Image credit: NASA/JPL/Space Science Institute.
+ Click for full image.


At the time, Cassini was about 1.3 billion kilometers (826 million miles) from Earth. Numerous images, perhaps as many as 500, were taken by the visible light camera and were being transmitted back to Earth. It takes 1 hour and 14 minutes for the images to travel from the spacecraft to Earth. The downlink of data will continue through the night into the early morning hours. Cassini project engineers will continue to keep a close watch on a rainstorm in Spain, which may interrupt the flow of data from the spacecraft.

The flyby was by far the closest any spacecraft has ever come to Titan, the largest moon of Saturn, perpetually drenched in a thick blanket of smog. Titan is a prime target of the Cassini-Huygens mission because it is the only moon in our solar system with an atmosphere. It is a cosmic time capsule that offers a look back in time to see what Earth might have been like before the appearance of life.

The Huygens probe, built and operated by the European Space Agency, is attached to Cassini; its release is planned on Christmas Eve. It will descend through Titan's opaque atmosphere on Jan. 14, 2005, to collect data and touch down on the surface.

The latest information and images from Cassini are available at http://www.nasa.gov/cassini. Additional information on the mission and raw images are at http://saturn.jpl.nasa.gov .