Cassini Reveals Saturn's Cool Rings
The Cassini spacecraft has taken the most detailed temperature measurements to date of Saturn's rings. Data taken by the composite infrared spectrometer instrument on the spacecraft while entering Saturn's orbit show the cool and relatively warm regions of the rings. 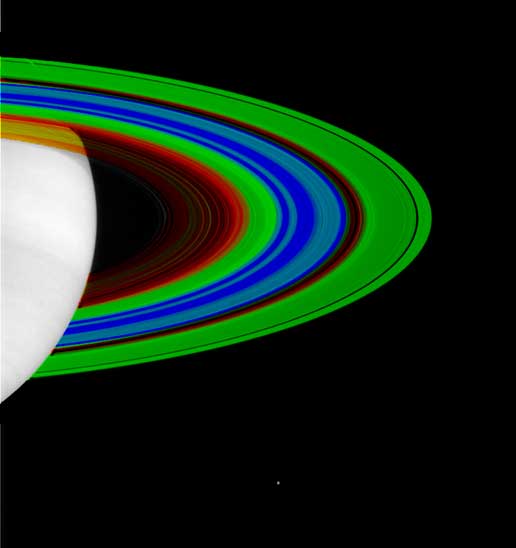 Image above: The varying temperatures of Saturn's rings are depicted in this false-color image from the Cassini spacecraft. This image represents the most detailed look to date at the temperature of Saturn's rings. + Full image and caption Image credit: NASA/JPL/GSFC/Ames.

The data show that the opaque region of the rings, like the outer A ring (on the far right) and the middle B ring, are cooler, while more transparent sections, like the Cassini Division (in red just inside the A ring) or the inner C ring (shown in yellow and red), are warmer. Scientists had predicted this might be the case, because the opaque ring areas would let less light through, and the transparent areas, more. These results also show, for the first time, that individual ringlets in the C ring and the Cassini Division are cooler than the surrounding, more transparent regions.

The temperature data were taken on July 1, 2004, shortly after Saturn orbit insertion. Cassini is so close to the planet that no pictures of the unlit side of the rings are available, hence the temperature data was mapped onto a picture of the lit side of the rings. Saturn is overexposed and pure white in this picture. Saturn’s moon Enceladus is visible below the rings, toward the center.

The composite infrared spectrometer, one of 12 instruments on Cassini, will measure infrared emissions from atmospheres, rings and surfaces. This spectrometer will create vertical profiles of temperature and gas composition for the atmospheres of Titan and Saturn. During Cassini’s four-year tour, the instrument will also gather information on the thermal properties and composition of Saturn’s rings and icy moons.

Cassini-Huygens is a cooperative project of NASA, the European Space Agency and the Italian Space Agency. The Jet Propulsion Laboratory, a division of the California Institute of Technology in Pasadena, manages the Cassini-Huygens mission for NASA's Science and Mission Directorate, Washington. The Cassini orbiter was designed, developed and assembled at JPL. The Composite Infrared Spectrometer team is based at NASA's Goddard Space Flight Center, Greenbelt, Md.