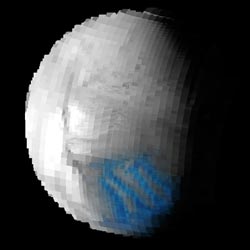 These findings support previous results showing the moon's southern pole is active. The pole had episodes of geologic activity as recently as 10 years ago. These cracked features are approximately 130 kilometers long (80 miles), spaced about 40 kilometers (25 miles) apart and run roughly parallel to one another.

The cracks act like vents. They spew vapor and fine ice water particles that have become ice crystals. This crystallization process can be dated, which helped scientists pin down the age of the features.

"There appears to be a continual supply of fresh, crystalline ice at the tiger stripes, which could have been very recently resurfaced," said Dr. Bonnie Buratti. She is a team member of the Cassini visual and infrared mapping spectrometer at NASA's Jet Propulsion Laboratory, Pasadena, Calif. "Enceladus is constantly evolving and getting a makeover." 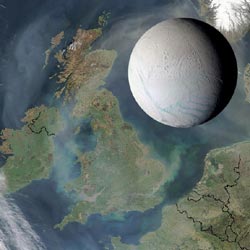 Image left: Saturn's moon Enceladus is only 505 kilometers (314 miles) across, small enough to fit within the length of the United Kingdom, as illustrated here. Image credit: NASA/JPL/Space Science Institute
+ Browse version of image

This finding is especially exciting because ground-based observers have seen tiny Enceladus brighten as its south pole was visible from Earth. Cassini allows scientists to see close up that the brightening is caused by geologic activity. When NASA's Voyager 2 spacecraft flew over the moon's north pole in 1981, it did not observe the tiger stripes.

When ice comes out of the "hot" cracks, or "tiger stripes," at the south pole, it forms as fresh, crystalline ice. As the ice near the poles remains cold and undisturbed, it ages and converts to amorphous ice. Since this process is believed to take place over decades or less, the tiger stripes must be very young.

"One of the most fascinating aspects of Enceladus is that it is so very small as icy moons go, but so very geophysically active. It's hard for a body as small as Enceladus to hold onto the heat necessary to drive such large-scale geophysical phenomena, but it has done just that," said Dr. Bob Brown. Brown is a team leader for the visual and infrared mapping spectrometer at the University of Arizona, Tucson. "Enceladus and its incredible geology is a marvelous puzzle for us to figure out."

Adding to the already mounting evidence for an active body is the correlation of results from multiple instruments. Cassini's cameras provided detailed images of the south polar cap, in which the tiger stripe fractures were found to be among the hottest features.

Enceladus is on a short list of bodies in our solar system where scientists have found internal activity. The others are the volcanoes on Jupiter's moon Io and geysers on Neptune's moon Triton.

Data for these measurements were taken during Cassini's closest flyby on July 14, 2005. The spacecraft came within 175 kilometers (109 miles) of the surface of Enceladus. Enceladus is 500 kilometers (314 miles) across and has the most reflective surface in the solar system.

The Cassini-Huygens mission is a cooperative project of NASA, the European Space Agency and the Italian Space Agency. The Jet Propulsion Laboratory, a division of the California Institute of Technology in Pasadena, manages the mission for NASA's Science Mission Directorate, Washington.