That's how two researchers describe their recent findings, published in the July 23 issue of the Geophysical Research Letters. Their paper is based on data from the Cassini spacecraft radio and plasma wave science instrument. The study investigates sounds that are not just eerie, but also descriptive of a phenomenon similar to Earth's northern lights. 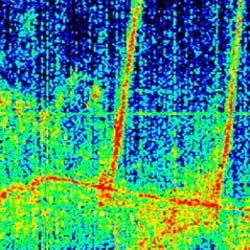 "All of the structures we observe in Saturn's radio spectrum are giving us clues about what might be going on in the source of the radio emissions above Saturn's auroras," said Dr. Bill Kurth, deputy principal investigator for the instrument. He is with the University of Iowa, Iowa City. Kurth made the discovery along with Principal Investigator Don Gurnett, a professor at the University. "We believe that the changing frequencies are related to tiny radio sources moving up and down along Saturn's magnetic field lines."

The radio emissions, called Saturn kilometric radiation, are generated along with Saturn's auroras, or northern and southern lights. Because the Cassini instrument has higher resolution compared to a similar instrument on NASA's Voyager spacecraft, it has provided more detailed information on the spectrum and the variability of radio emissions. The high-resolution measurements allow scientists to convert the radio waves into audio recordings by shifting the frequencies down into the audio frequency range.

The terrestrial cousins of Saturn's radio emissions were first reported in 1979 by Gurnett, who used an instrument on the International Sun-Earth Explorer spacecraft in Earth orbit. Kurth said that despite their best efforts, scientists still haven't agreed on a theory to fully explain the phenomenon.

They will get another chance to solve the radio emission puzzle beginning in mid-2008 when Cassini will fly close to, or possibly even through, the source region at Saturn. Gurnett said, “It is amazing that the radio emissions from Earth and Saturn sound so similar.”

Cassini, carrying 12 scientific instruments, on June 30, 2004, became the first spacecraft to orbit Saturn. It is conducting a four-year study of the planet, its rings and many moons. The spacecraft carried the Huygens probe, a six-instrument European Space Agency probe that landed on Titan, Saturn's largest moon, in January 2005.

The Cassini-Huygens mission is a cooperative project of NASA, the European Space Agency and the Italian Space Agency. The Jet Propulsion Laboratory, a division of the California Institute of Technology in Pasadena, manages the Cassini-Huygens mission for NASA's Science Mission Directorate, Washington. JPL designed, developed and assembled the Cassini orbiter. The radio and plasma wave science team is based at the University of Iowa, Iowa City.

For information on the Cassini mission visit http://saturn.jpl.nasa.gov and http://www.nasa.gov/cassini .