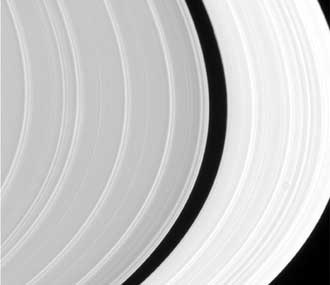 "For years, we've dreamed about getting pictures like this. After all the planning, waiting and worrying, just seeing these first images makes it all worthwhile," said Dr. Charles Elachi, Cassini radar team leader and director of NASA's Jet Propulsion Laboratory, Pasadena, Calif. "We're eager to share these new views and the exciting discoveries ahead with people around the world."

The narrow angle camera on Cassini took 61 images soon after the main engine burn that put Cassini into orbit on Wednesday night. The spacecraft was hurtling at 15 kilometers per second (about 34,000 miles per hour), so only pieces of the rings were targeted.

"We won't see the whole puzzle, only pieces, but what we are seeing is dramatic," said Dr. Carolyn Porco, Cassini imaging team leader, Space Science Institute, Boulder, Colo. "The images are mind-boggling, just mind-boggling. I've been working on this mission for 14 years and I shouldn't be surprised, but it is remarkable how startling it is to see these images for the first time."

Some images show patterned density waves in the rings, resembling stripes of varying width. Another shows a ring's scalloped edge. "We do not see individual particles but a collection of particles, like a traffic jam on a highway," Porco said. "We see a bunch of particles together, then it clears up, then there's traffic again."

Other instruments on Cassini besides the camera have also been busy collecting data. The magnetospheric imaging instrument took the first image of Saturn's magnetosphere. "With Voyager we inferred what it looked like, in the same way that a blind man feels an elephant. Now we can see the elephant," said Dr. Tom Krimigis of Johns Hopkins Applied Physics Laboratory, Laurel, Md., principal investigator for the magnetospheric imaging instrument. The magnetosphere is a bubble of energetic particles around the planet shaped by Saturn's magnetic field and surrounded by the solar wind of particles speeding outward from the Sun.

"During approach to Saturn, Cassini was greeted at the gate," said Dr. Bill Kurth, deputy principal investigator for the radio and plasma wave science instrument onboard Cassini. "The bow shock where the solar wind piles into the planet's magnetosphere was encountered earlier than expected. It was as if Saturn's county line had been redrawn, and that was a surprise." Cassini first crossed the bow shock about 3 million kilometers (1.9 million miles) from Saturn, which is about 50 percent farther from the planet than had been detected by the Pioneer, Voyager 1 and Voyager 2 spacecraft that flew past Saturn in 1979, 1980 and 1981.

The location of the bow shock varies with how hard the solar wind is blowing, Kurth said. As the magnetosphere repeatedly expanded and contracted while Cassini was approaching Saturn, the spacecraft crossed the bow shock seven times.

For the latest images and more information about the Cassini- Huygens mission, visit http://saturn.jpl.nasa.gov and http://www.nasa.gov/cassini.