Cassini Spacecraft Arrives at Saturn
The international Cassini-Huygens mission has successfully entered orbit around Saturn. At 9:12 p.m. PDT on Wednesday, flight controllers received confirmation that Cassini had completed the engine burn needed to place the spacecraft into the correct orbit. This begins a four-year study of the giant planet, its majestic rings and 31 known moons. 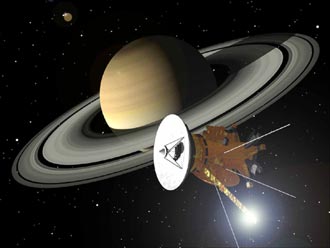 "This is a tribute to the team at NASA and our partners at the European Space Agency and the Italian Space Agency, to accomplish this feat taking place 934 million miles [1.5 billion kilometers] away from Earth," said Dr. Ed Weiler, associate administrator for space science at NASA Headquarters, Washington, D.C. "What Cassini-Huygens will reveal during its tour of Saturn and its many moons, including Titan, will astonish scientists and the public. Everyone is invited to come along for the ride and see all this as it is happening. It truly is a voyage of discovery."

"We didn't expect anything less and couldn't have asked for anything more from the spacecraft and the team," said Robert T. Mitchell, program manager for the Cassini-Huygens mission at JPL. "This speaks volumes to the tremendous team that made it all happen."

Dr. Charles Elachi, JPL director and team leader on the radar instrument onboard Cassini, said, "It feels awfully good to be in orbit around the lord of the rings. This is the result of 22 years of effort, of commitment, of ingenuity, and that's what exploration is all about."

The mission will face another dramatic challenge in December, when the spacecraft will release the piggybacked Huygens probe - provided by the European Space Agency - which will plunge through the hazy atmosphere of Saturn's largest moon, Titan.

"This was America's night. This was NASA doing it right," said Dr. David Southwood, director of scientific programs for the European Space Agency. "They really gave those of us in Europe a challenge. We've got six months to go until we land on Titan. We're just praying that everything will go as well."

Julie Webster, Cassini-Huygens spacecraft team chief, said, "The spacecraft has been an incredible joy to fly. We stand on the shoulders of people who had 40 years of experience building and designing spacecraft."

Saturn is the sixth planet from the Sun. It is the second largest planet in our solar system, after Jupiter. The planet and ring system serve as a miniature model of the disc of gas and dust surrounding our early Sun that eventually formed the planets. Detailed knowledge of the dynamics of interactions among Saturn's elaborate rings and numerous moons will provide valuable data for understanding how each of the solar system's planets evolved.

The first images are expected to return Thursday morning. Science measurements gathered Wednesday are the closest ever obtained of Saturn. Those measurements may reveal details of the gravitational and magnetic fields that tell scientists about Saturn's interior.

For the latest images and more information about the Cassini-Huygens mission, visit http://saturn.jpl.nasa.gov and http://www.nasa.gov/cassini.