NASA's Cassini Reveals Lake-Like Feature on Titan
Scientists are fascinated by a dark, lake-like feature recently observed on Saturn's moon Titan. NASA's Cassini spacecraft captured a series of images showing a marking, darker than anything else around it. It is remarkably lake-like, with smooth, shore-like boundaries unlike any seen previously on Titan.

"I'd say this is definitely the best candidate we've seen so far for a liquid hydrocarbon lake on Titan," said Dr. Alfred McEwen, Cassini imaging team member and a professor at the University of Arizona, Tucson. The suspected lake area measures 234 kilometers long by 73 kilometers wide (145 miles by 45 miles), about the size of Lake Ontario, on the U.S. Canadian border. 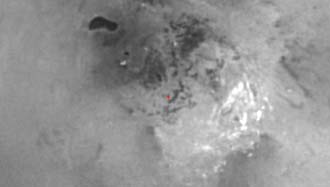 Image right:This view of Titan's south polar region reveals an intriguing dark feature that may be the site of a past or present lake of liquid hydrocarbons. Image credit: NASA/JPL/Space Science Institute.
+ Full image and caption
+ Related animation

"This feature is unique in our exploration of Titan so far," said Dr. Elizabeth Turtle, Cassini imaging team associate at the University of Arizona. "Its perimeter is intriguingly reminiscent of the shorelines of lakes on Earth that are smoothed by water erosion and deposition."

The feature lies in Titan's cloudiest region, which is presumably the most likely site of recent methane rainfall. This, coupled with the shore-like smoothness of the feature's perimeter makes it hard for scientists to resist speculation about what might be filling the lake, if it indeed is one.

"It's possible that some of the storms in this region are strong enough to make methane rain that reaches the surface," said Cassini imaging team member Dr. Tony DelGenio of NASA's Goddard Institute for Space Studies in New York.

"Given Titan's cold temperatures, it could take a long time for any liquid methane collecting on the surface to evaporate. So it might not be surprising for a methane-filled lake to persist for a long time," DelGenio added.

Despite earlier predictions, no definitive evidence for open bodies of liquid has been found on Titan. Cassini has not yet been in a favorable position for using its cameras to check for glints from possible surface liquids in the south polar region.

"Eventually, as the seasons change over a few years, the convective clouds may migrate northward to lower latitudes," said DelGenio, "If so, it will be interesting to see whether the Cassini cameras record changes in the appearance of the surface as well."

"An alternate explanation is that this feature was once a lake, but has since dried up, leaving behind dark deposits," Turtle said. Yet another possibility is that the lake is simply a broad depression filled by dark, solid hydrocarbons falling from the atmosphere onto Titan's surface. In this case, the smooth outline might be the result of a process unrelated to rainfall, such as a sinkhole or a volcanic caldera.

"It is already clear that whatever this lake-like feature turns out to be, it is only one of many puzzles that Titan will throw at us as we continue our reconnaissance of the surface over the next few years," said Dr. Carolyn Porco, imaging team leader at the Space Science Institute in Boulder, Colo.

Thirty-nine more Titan flybys are planned for Cassini's prime mission. In future flybys the science teams will search for opportunities to observe the lake feature again and to look for mirror-like reflections from smooth surfaces elsewhere on Titan. Such reflections would strongly support the presence of liquids.

The Cassini-Huygens mission is a cooperative project of NASA, the European Space Agency and the Italian Space Agency. JPL manages the Cassini mission for NASA's Science Mission Directorate, Washington. The Cassini orbiter and its two onboard cameras were designed, developed and assembled at JPL. The imaging team is based at the Space Science Institute in Boulder.

To view a computer-enhanced image of the feature and a three-frame movie showing the evolution of nearby clouds on the Internet, visit: http://www.nasa.gov/cassini, http://saturn.jpl.nasa.gov and http://ciclops.org .