Getting Closer to Titan
Irregular bright and dark regions of yet unidentified composition and character are becoming increasingly visible on Titan's surface as Cassini approaches its scheduled first flyby of Saturn's largest moon on July 2, 2004. 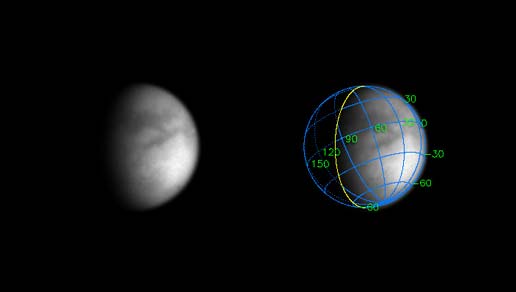 This view represents an improvement in resolution of nearly three times over the previous Cassini images of Titan. Titan's surface is difficult to study, veiled by a dense hydrocarbon haze that forms in the high stratosphere as methane is destroyed by sunlight. This image is different from previous Titan images by Cassini because it was taken through a special filter, called a polarizer, which is designed to see through the atmosphere to the surface.

Cassini will conduct a critical 96-minute burn before going into orbit around Saturn on June 30 (July 1 Universal Time), with its first scheduled flyby of Titan on July 2.