Like a woolly mammoth trapped in Arctic ice, Saturn's small moon Phoebe may be a frozen artifact of a bygone era, some four billion years ago. The finding is suggested by new data from the Cassini spacecraft.

Cassini scientists reviewed data from the spacecraft's June 11, 2004, flyby of the diminutive moon. They concluded Phoebe is likely a primordial mixture of ice, rock and carbon-containing compounds similar in many ways to material seen in Pluto and Neptune's moon Triton. Scientists believe bodies like Phoebe were plentiful in the outer reaches of the solar system about four and a half billion years ago.

Image right: This colorful graphic illustrates that despite Phoebe's bumpy, irregular topography, the moon has a fairly round shape. A digitally rendered shape model of Phoebe was constructed using Cassini imaging data obtained before and after the spacecraft's close flyby of the moon on June 11, 2004. + Click for full image and caption. Image credit: NASA/JPL/Space Science Institute.

These icy planetesimals (small bodies) formed the building blocks of the outer solar system and some were incorporated into the giant planets Jupiter, Saturn, Uranus and Neptune. During this process, gravitational interactions ejected much of this material to distant orbits, joining a native population of similar bodies to form the Kuiper Belt.

"Phoebe apparently stayed behind, trapped in orbit about the young Saturn, waiting eons for its secrets to be revealed during its rendezvous with the Cassini spacecraft," said Dr. Torrence Johnson, Cassini imaging team member at NASA's Jet Propulsion Laboratory, Pasadena, Calif.

"All our evidence leads us to conclude, Phoebe's surface is made of water ice, water-bearing minerals, carbon dioxide, possible clays and primitive organic chemicals in patches at different locations on the surface," said Dr. Roger N. Clark, team member for the visual and infrared mapping spectrometer, U.S. Geological Survey in Denver. "We also see spectral signatures of materials we have not yet identified." Cassini's observations gave scientists the first detailed look at one of these primitive icy planetesimals. 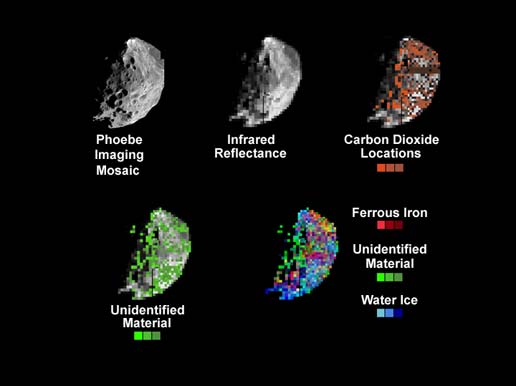 Image above: This set of images, created during the Phoebe flyby, shows the location and distribution of water-ice, ferric iron, carbon dioxide and an unidentified material on the tiny moon of Saturn. + Click for full image and caption. Image credit: NASA/JPL//University of Arizona

Spectral measurements, light intensity as a function of color or wavelength, confirmed the presence of water ice previously detected by Earth-based telescopes. The measurements provided evidence for hydrated minerals on Phoebe's surface, and detected carbon dioxide and solid hydrocarbons similar to those found in primitive meteorites.

"One intriguing result is the discovery of possible chemical similarities between the materials on Phoebe and those seen on comets," said Dr. Robert H. Brown, team leader for the visible and infrared mapping spectrometer, University of Arizona, Tucson. Evidence that Phoebe might be chemically kin to comets strengthens the case that it is similar to Kuiper Belt Objects.

Measurements taken by the composite infrared spectrometer were used to generate temperature maps. The maps show the surface of Phoebe is very cold, only about 110 degrees above absolute zero (minus 163 degrees Celsius, or minus 261 degrees Fahrenheit). Even colder nighttime temperatures suggest a fluffy, porous surface layer. 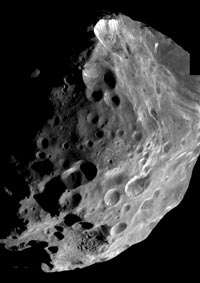 Image left: In this mosaic of high resolution images, Phoebe shows an unusual variation in brightness over its surface due to the existence on some crater slopes and floors of bright material ­ thought to contain ice ­ on what is otherwise one of the darkest known bodies in the solar system.+ Click for full image and caption. Image credit: NASA/JPL/Space Science Institute.

"One of the first results from this map is the surface of Phoebe has been badly chewed up, probably by meteorite impacts," said Dr. John Pearl, a Cassini co-investigator for the composite infrared spectrometer, at NASA's Goddard Space Flight Center, Greenbelt, Md. "We are discovering Phoebe is a very complex object, with large variations in topography."

"We have conducted our first analysis of an outer solar system resident akin to Kuiper Belt Objects," said Dr. Dennis Matson, project scientist of the Cassini-Huygens mission at JPL. "In two short weeks, we have added more to what we know about Phoebe than we had learned about it since it was discovered 100 years ago. We did this by having multiple instruments conducting investigations all at one time during our flyby."

The Cassini-Huygens mission is a cooperative project of NASA, the European Space Agency and the Italian Space Agency. JPL manages the mission for NASA's Office of Space Science, Washington. For the latest images and more information about the mission on the Internet, visit http://www.nasa.gov and http://saturn.jpl.nasa.gov.