Phoebe's Surface Reveals Clues to Its Origin
Images collected during Cassini's close flyby of Saturn's moon, Phoebe, have yielded strong evidence that the tiny object may contain ice-rich material, overlain with a thin layer of darker material perhaps 300 to 500 meters (980 to 1,600 feet) thick. 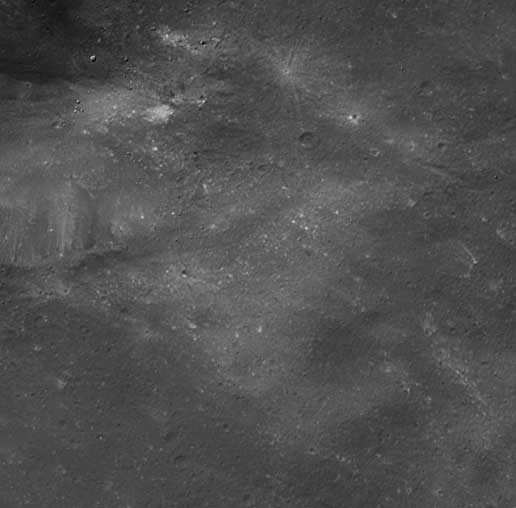 Image above: On June 11, 2004, during its closest approach to Phoebe, Cassini obtained this extremely high resolution view of a dark, desolate landscape. Regions of different reflectivity are clearly visible on what appears to be a gently rolling surface. + Click for full image and caption. Image credit: NASA/JPL/Space Science Institute

The surface of Phoebe is also heavily potholed with large and small craters. Images reveal bright streaks in the ramparts of the largest craters, bright rays which emanate from smaller craters, and uninterrupted grooves across the face of the body.

"The imaging team is in hot debate at the moment on the interpretations of our findings," said Dr. Carolyn Porco, Cassini imaging team leader at the Space Science Institute in Boulder, Colo. "Based on our images, some of us are leaning towards the view that has been promoted recently, that Phoebe is probably ice-rich and may be an object originating in the outer solar system, more related to comets and Kuiper Belt objects than to asteroids."

In ascertaining Phoebe's origin, imaging scientists are noting important differences between the surface of Phoebe and that of rocky asteroids which have been seen at comparable resolution. "Asteroids seen up close, like Ida, Mathilde, and Eros, and the small martian satellites do not have the bright 'speckling' associated with the small craters that are seen on Phoebe," said Dr. Peter Thomas, an imaging team member from Cornell University, Ithaca, N.Y.

The landforms observed in the highest resolution images also contain clues to the internal structure of Phoebe. Dr. Alfred McEwen, an imaging team member from the University of Arizona, Tucson, said, "Phoebe is a world of dramatic landforms, with craters everywhere, landslides, and linear structures such as grooves, ridges, and chains of pits. These are clues to the internal properties of Phoebe, which we'll be looking at very closely in order to understand Phoebe's origin and evolution."

"I think these images are showing us an ancient remnant of the bodies that formed over four billion years ago in the outer reaches of the solar system," said Dr. Torrence Johnson, an imaging team member from NASA's Jet Propulsion Laboratory, Pasadena, Calif. "Battered and beat-up as it is, it is still giving us clues to its origin and history."

Phoebe may be an icy interloper from the distant outer solar system which found itself captured by giant Saturn in its earliest, formative years. Final conclusions on Phoebe's origins await a combination of the results on Phoebe's surface structures, mass and composition gathered from all 11 instruments, which collected data during the flyby on June 11, 2004.

"This has been an impressive whirlwind flyby and it's only a curtain raiser on the events about to begin," said Porco.

Cassini arrives in orbit around Saturn on the evening of June 30, 2004 (July 1 Universal Time).

The Cassini-Huygens mission is a cooperative project of NASA, the European Space Agency and the Italian Space Agency. JPL, a division of the California Institute of Technology in Pasadena, manages the Cassini-Huygens mission for NASA's Office of Space Science, Washington, D.C. The Cassini orbiter and its two onboard cameras were designed, developed and assembled at JPL. The imaging team is based at the Space Science Institute, Boulder, Colo.

For the latest images and information about the Cassini-Huygens mission, visit http://saturn.jpl.nasa.gov and the Cassini imaging team home page, http://ciclops.org. For more information on NASA programs, visit www.nasa.gov.