Cassini Radio Signals Decipher Saturn Ring Structure
The Cassini spacecraft has obtained the most detailed look ever at Saturn's rings, including the B ring, which has eluded previous robotic explorers. Its structure seems remarkably different from its two neighbors, rings A and C.

The origin of Saturn's rings is a mystery. The rings are an enormous, complex structure. From edge-to-edge, the ring system would not even fit in the distance between Earth and the Moon. The seven main rings are labeled in the order they were discovered. From the planet outward, they are D, C, B, A, F, G and E. 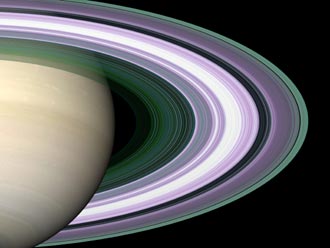 Image right: This simulated image was constructed from the measured optical depth profiles. It depicts the observed ring structure at about 10 kilometers (6 miles) in resolution. Color is used to represent information about ring particle sizes in different regions based on the measured effects of the three radio signals. Image credit: NASA/JPL.
+ Full image and caption

During a recent radio experiment, Cassini mapped this structure with clarity never before available. This is the first of many such observations Cassini will be conducting over the summer.

"The structure of those remarkable rings is a sight to behold. All ring features appear to be populated by a broad range of particle sizes that extend to many meters in diameter at the upper end," said Dr. Essam Marouf, Cassini radio science team member and professor of electrical engineering, San Jose State University, San Jose, Calif.

Cassini found that the inner and outer parts of ring B contain rings that are hundreds of kilometers wide (hundreds of miles) and vary greatly in the amount of material they contain. A thick, 5,000-kilometer-wide (3,100-mile) core contains several bands with ring material that is nearly four times as dense as that of ring A and nearly 20 times as dense as that of ring C.

Cassini also detected more than 40 wavy features called "density waves" in ring A, many near its outer region, close to the moons orbiting just outside the ring. The density wave observations will tell more about the ring surface mass density, its vertical thickness and other physical properties.

"A marvelous array of waves, caused by gravitational interactions with nearby moons, has been uncovered throughout ring A," said Marouf. "We also see a major density wave in the dense ring B. Some of these waves have been seen in Voyager and other Cassini observations, but not in this large number and not with this exceptional clarity."

Cassini conducted this first radio occultation observation of Saturn's rings, atmosphere and ionosphere on May 3, 2005. An occultation means that if you watch Cassini from Earth, Cassini would appear occulted, or hidden, behind the rings. During a radio occultation, Cassini sends a radio signal from the spacecraft through the rings to Earth. Scientists then watch how the strength of the radio signal is affected as the signal passes through ring material. The denser a ring is, the weaker the signal received. The experiment helps scientists map the distribution of the amount of ring material and determine the ring particle sizes.

The occultation was the first ever to use three radio signals of different frequencies (called Ka, X and S) transmitted simultaneously from a spacecraft to Earth-receiving stations of NASA's Deep Space Network. Ring particles of different sizes affect each frequency differently.

The Cassini tour was specifically designed to optimize the geometry of the first radio occultation experiment and seven other occultations scheduled from May to September 2005. These observations are at the heart of Cassini's fundamental science objectives of characterizing and understanding Saturn and its ring system. During its lifetime, Cassini will obtain 20 radio occultations and 80 stellar occultations, providing far more detailed knowledge of the ring structures.