Cassini Finds New Saturn Moon That Makes Waves
In a spectacular kick-off to its first season of prime ring viewing, which began last month, the Cassini spacecraft has confirmed earlier suspicions of an unseen moon hidden in a gap in Saturn's outer A ring. A new image and movie show the new moon and the waves it raises in the surrounding ring material. 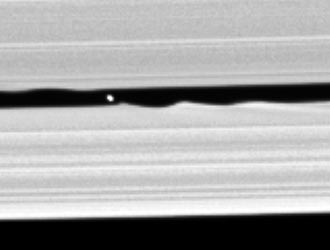 Image right: Cassini's confirmation that a small moon orbits within the Keeler gap in Saturn's rings is made all the more exciting by this image, in which the disk of the 7 kilometer-wide body (4-miles) is resolved for the first time. Image credit: NASA/JPL/Space Science Institute.
+ Full image and caption
+ Moon movie

The moon, provisionally named S/2005 S1, was first seen in a time- lapse sequence of images taken on May 1, 2005, as Cassini began its climb to higher inclinations in orbit around Saturn. A day later, an even closer view was obtained, which has allowed a measure of the moon's size and brightness.

The images show the tiny object in the center of the Keeler gap and the wavy patterns in the gap edges that are generated by the moon's gravitational influence. The Keeler gap is located about 250 kilometers (155 miles) inside the outer edge of the A ring, which is also the outer edge of the bright main rings. The new object is about 7 kilometers (4 miles) across and reflects about half the light falling on it -- a brightness that is typical of the particles in the nearby rings.

"It's too early to make out the shape of the orbit, but what we've seen so far of its motion suggests that it is very near the exact center of the gap, just as we had surmised," said Dr. Joseph Spitale, imaging team associate and planetary scientist at the Space Science Institute in Boulder, Colo. The new moonlet orbits approximately 136,505 kilometers (84,820 miles) from the center of Saturn. More Cassini observations will be needed to determine whether the moon's orbit around Saturn is circular or eccentric.

S/2005 S1 is the second known moon to exist within Saturn's rings. The other is Pan, 25 kilometers (16 miles) across, which orbits in the Encke gap. Atlas and other moons exist outside the main ring system, as do the two F ring shepherd moons, Prometheus and Pandora.

"The obvious effect of this moon on the surrounding ring material will allow us to determine its mass and test our understanding of how rings and moons affect one another," said Dr. Carl Murray, imaging team member from Queen Mary, University of London. An estimate of the moon's mass, along with a measure of its size, yields information on its physical makeup. For instance, the new moonlet might be quite porous, like an orbiting icy rubble pile. Other moons near the outer edge of Saturn's rings - like Atlas, Prometheus and Pandora - are also porous. Whether a moon is porous or dense says something about how it was formed and its subsequent collision history.

The Keeler gap edges also bear similarities to the scalloped edges of the 322-kilometer-wide (200-mile) Encke gap, where the small moon Pan (25 kilometers, or 16 miles across) resides. From the size of the waves seen in the Encke gap, imaging scientists were able to estimate the mass of Pan. They expect to do the same eventually with this new moon.

"Some of the most illuminating dynamical systems we might hope to study with Cassini are those involving moons embedded in gaps," said Dr. Carolyn Porco, imaging team leader at the Space Science Institute. "By examining how such a body interacts with its companion ring material, we can learn something about how the planets in our solar system might have formed out of the nebula of material that surrounded the Sun long ago. We anticipate that many of the gaps in Saturn's rings have embedded moons, and we'll be in search of them from here on."

Additional closer observations of the new body may take place in the next several months, as Cassini continues its intensive survey of Saturn's beautiful and mysterious rings.