Cassini Finds Particles Near Saturn's Moon Enceladus
The Cassini spacecraft has discovered intriguing dust particles around Saturn's moon Enceladus. The particles might indicate the existence of a dust cloud around Enceladus, or they may have originated from Saturn's outermost ring, the E-ring. 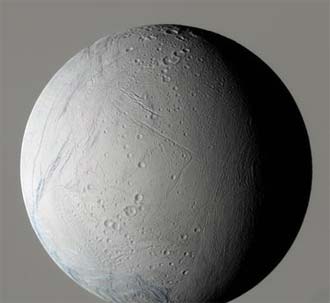 "We are making measurements in the plane of the E-ring,” said Dr. Thanasis Economou, a senior scientist at the University of Chicago's Enrico Fermi Institute. Economou is the lead researcher on the high rate detector, part of a larger instrument on Cassini called the cosmic dust analyzer. "It will take a few more flybys to distinguish if the dust flux is originating from the E-ring as opposed to a source at Enceladus."

Enceladus is rapidly becoming a very interesting target for Cassini. So much so that scientists and engineers are planning to revise the altitude of the next flyby to get a closer look. Additional Cassini encounters with Enceladus are scheduled for July 14, 2005, and March 12, 2008. The July 14 flyby was to be at an altitude of 1,000 kilometers (620 miles), but the mission team now plans to lower that altitude to about 175 kilometers (109 miles). This will be Cassini's lowest-altitude flyby of any object during its nominal four-year tour.

Earlier this year Cassini completed two flybys of Enceladus. On February 17, Cassini encountered Enceladus at an altitude of 1,167 kilometers (725 miles). On that date, the cosmic dust analyzer with its high rate detector recorded thousands of particle hits during a period of 38 minutes. Cassini executed another flyby of Enceladus on March 9 at an altitude of 500 kilometers (310 miles). "Again we observed a stream of dust particles," said Economou. The largest particles detected measure no more than the diameter of a human hair -- too small to pose any danger to Cassini.

Scientists have speculated that Enceladus is the source of Saturn's E ring, the planet's widest, stretching 302,557 kilometers (188,000 miles). It's possible, the scientists say, that tidal interactions between Enceladus and Mimas, two other moons of Saturn, have heated Enceladus' interior causing water volcanism.

"These measurements are extremely important in order to understand the role of Enceladus as the source of the water ice particles in the E ring," said Dr. Ralf Srama, of the Max Planck Institute for Nuclear Physics, Heidelberg, Germany. Srama is principal investigator of the cosmic dust analyzer science team. This study requires precise measurements of dust densities near the Enceladus region, "but without the high rate detector this would not be possible," said Srama.

Another of Cassini's instruments, the magnetometer, recently discovered water ions which could be part of a very thin atmosphere around Enceladus. Enceladus is a relatively small moon. The amount of gravity it exerts is not enough to hold an atmosphere very long. Therefore a strong, continuous source is required to maintain the atmosphere.

Enceladus measures 500 kilometers (310 miles) in diameter and reflects nearly 100 percent of the light that hits its ice- covered surface. It orbits Saturn at a distance of approximately 237,378 kilometers (147,500 miles), about two-thirds the distance from Earth to the Moon.

The cosmic dust analyzer provides direct observations of small ice or dust particles in the Saturn system in order to investigate their physical, chemical and dynamical properties. It is made up of two detectors. The University of Chicago built the high rate detector, which made these observations. With further analysis, the cosmic dust analyzer might be able to determine whether the particles are made of ice or dust.