"For the last seven months it has been a nonstop, science-packed mission. It has been a whirlwind, and already we have many new results," said Dr. Dennis Matson, Cassini project scientist at NASA's Jet Propulsion Laboratory, Pasadena, Calif. 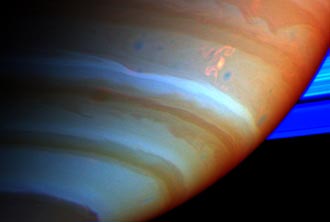 Image right: Saturn's atmosphere and its rings are shown here in a false color composite made from Cassini images taken in near infrared light through filters that sense different amounts of methane gas. Image credit: NASA/JPL/Space Science Institute.
+ Full image and caption.

Weak, linear density waves caused in Saturn's rings by the small moons Atlas and Pan have yielded more reliable calculations of their masses. The masses imply the moons are very porous, perhaps constructed like rubble piles. They are similar to the moons that shepherd Saturn's F ring, Prometheus and Pandora.

Another discovery was a tiny moon, about 5 kilometers (3 miles) across, recently named Polydeuces. Polydeuces is a companion, or "Trojan" moon of Dione. Trojan moons are found near gravitationally stable points ahead or behind a larger moon. Saturn is the only planet known to have moons with companion Trojan moons. 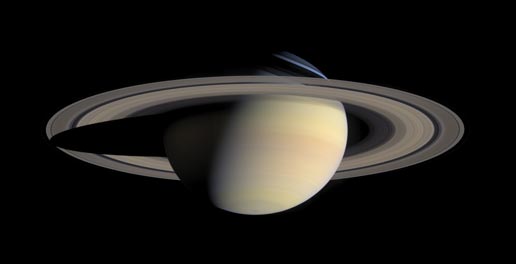 Image above: In early October 2004, Cassini captured a series of images that have been composed into the largest, most detailed, global natural color view of Saturn and its rings ever made. Image credit: NASA/JPL/Space Science Institute.
+ Full image and caption.

The new findings, published in this week's edition of the journal Science, include refinements in the orbits of several of Saturn's small satellites. One intriguing result is the eccentric and slightly inclined orbit of Pan in Saturn's A ring. The orbit's shape is significant, as it indicates the type of interaction the moon has with the ring material surrounding it. If Pan's orbit remains eccentric due to this interaction, then planets growing in a disc of material surrounding a star may also have eccentric orbits. This may help explain the eccentric paths of planets orbiting other stars.

Several faint Saturn rings have been discovered in Cassini images. Some lie in various gaps in the rings and may indicate the presence of tiny embedded moons acting as shepherds. Several of the rings are kinked, likely evidence of nearby moons.

Scientists also found Saturn's winds change with altitude, and small storms emerge out of large ones. For the first time, Cassini images captured possible evidence of processes that may maintain the winds on Saturn. The observations offer a glimpse into the process which transfers energy by convection from Saturn's interior to help sustain strong winds.

Another surprising find was made by the ion and neutral mass spectrometer instrument, which measured molecular oxygen ions above Saturn's ring plane. "This is at first surprising since the rings are made of water ice," said Dr. Hunter Waite, principal investigator for the spectrometer from the University of Michigan, Ann Arbor. "This may have important consequences for the identification of spectral features to use in the search for life on extrasolar terrestrial planet systems."

The abundance of molecular oxygen on Earth is uniquely tied to biology. But these new measurements at Saturn suggest there are lifeless processes associated with cold icy surfaces that may produce an independent pathway for the formation of molecular oxygen in atmospheres.