NASA Observations Help Determine Titan Wind Speeds
Strong westerly winds of up to about 400 kilometers per hour (250 miles per hour) buffeted the Huygens probe as it descended through Titan's upper atmosphere last month, according to NASA-led observations of the probe transmissions with Earth-based radio telescopes.

The winds eased to a mild breeze near the surface of Titan, Saturn's largest moon. 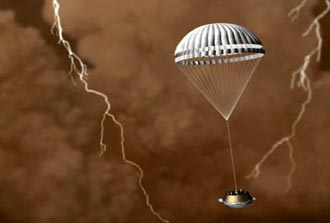 A preliminary estimate of the wind variations with altitude from about 110 kilometers (68 miles) down to the surface has been recovered by a joint team of researchers from NASA's Jet Propulsion Laboratory, Pasadena, Calif., collaborating with the Huygens Doppler wind experiment team led by Dr. Michael Bird in Bonn, Germany, and with the ground-based European Very Long Baseline Interferometry team led by Dr. Leonid Gurvits.

A network of radio telescope facilities, located around the world, received the radio signals transmitted by the Huygens probe to the Cassini orbiter during the probe's descent and landing on Titan on Jan. 14. "The information from the radio telescopes was originally intended to supplement similar wind data received from the Huygens Doppler wind experiment. However, the onboard experiment failed to return data." said Dr. William Folkner, the JPL principal investigator for the ground-based Doppler wind experiment.

"Our ground-based work salvaged the Doppler wind experiment," said Sami Asmar, a JPL co-investigator on the Huygens Doppler wind experiment. He had reported detecting the signal on the ground from the Green Bank Telescope facility in West Virginia. "The signal from the Huygens probe was not designed to be detected on Earth -- sometimes it pays to eavesdrop," said Asmar.

Winds are determined by the "Doppler shift" of the signal. Doppler shift is a change in the frequency when received at Earth due to the probe's motion in Titan's atmosphere, similar to the change in pitch of a passing train whistle.

"We provided the only real-time confirmation that the probe transmitted a signal at the expected time, released the stabilizer parachute and then impacted the surface," said Asmar. "We did this by monitoring the Doppler shift in the frequency of the signal received at the Green Bank Telescope and the Parkes Telescope in Australia."

"The Huygens Doppler team worked closely with the Joint Institute for Very Long Baseline Interferometry team in Europe, which coordinated the scheduling of many radio telescopes around the globe for complementary measurements that monitored the change in probe position," said Dr. Robert Preston, chief scientist of the Interplanetary Network Directorate at JPL.

The Deep Space Network lent the JPL team two special Radio Science Receivers and had one shipped to Green Bank from its complex in California and another to Parkes from its complex near Canberra. These receivers allowed for the real-time detection and confirmation of the Huygens radio signal. The same type of receivers were used at Deep Space Network stations for receiving the Cassini signal during Saturn orbit insertion in June 2004 and the Mars Exploration Rover signal during entry, descent and landing in January 2004.

The Green Bank Telescope and other participating U.S. telescopes are part of the National Radio Astronomy Observatory. The Parkes radio telescope is operated by the Australia Telescope National Facility. The radio astronomy support was coordinated by the Joint Institute for Very Long Baseline Interferometry in Europe.

For the latest images and information about the Cassini- Huygens mission, visit: http://www.nasa.gov/cassini and http://saturn.jpl.nasa.gov.

The Cassini-Huygens mission is a cooperative mission of NASA, the European Space Agency and the Italian Space Agency. The Jet Propulsion Laboratory, a division of the California Institute of Technology in Pasadena, manages the mission for NASA's Office of Space Science, Washington, D.C. The Cassini orbiter was designed, developed and assembled at JPL. ESA built and managed the development of the Huygens mission and was in charge of Huygens operations.