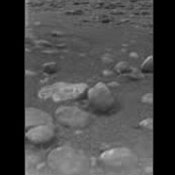 Image right: This raw image was returned by the Descent Imager/Spectral Radiometer camera onboard the European Space Agency's Huygens probe after the probe descended through the atmosphere of Titan. It shows the surface of Titan with ice blocks strewn around. Image credit: ESA/NASA/University of Arizona. + Full image and caption.

"The descent through Titan's atmosphere and down to its surface appeared to be perfect," Administrator O'Keefe said. "We congratulate ESA for their spectacular success. We're very proud of the Cassini-Huygens teams that helped to make this both an engineering and scientific victory, and we appreciate the dedication and support from our international partners."

The probe entered Titan's upper atmosphere at about 5:15 a.m. EST Jan. 14. During its two and one-half hour descent to the surface of the moon, it sampled the chemical composition of the atmosphere. The probe continued transmitting data for more than 90 minutes after reaching the surface.

The data was sent to NASA's Cassini spacecraft, and was recorded and relayed through NASA's Deep Space Network to the Jet Propulsion Laboratory, Pasadena, Calif., and to ESA's Space Operations Center in Darmstadt, Germany. The European Space Agency facility is the operations center for the Huygens probe mission. Data was received over one of two channels designed to be mostly redundant.

JPL Director Dr. Charles Elachi said, "We congratulate our colleagues at ESA on the splendid performance of the Huygens probe and look forward to the science results of this effort. This has been a great example of international collaboration to explore our solar system."

Cassini-Huygens is a joint mission of NASA, ESA and the Italian Space Agency. ESA's Huygens probe was carried to Saturn's orbit aboard Cassini, and sent on its way to Titan on Dec. 24, 2004. Cassini continues to orbit Saturn on a four-year prime mission to study the planet, its rings, moons and magnetosphere.

"Our ESA colleagues have every reason to be very proud of the excellent manner in which the Huygens probe performed," said Robert T. Mitchell, Cassini program manager at JPL. "We are also proud of our support for this endeavor," he said.

JPL, a division of the California Institute of Technology in Pasadena, manages the Cassini mission for NASA's Science Mission Directorate, Washington. JPL designed, developed and assembled the Cassini orbiter. ESA built and managed the development of the Huygens probe and is in charge of the probe operations. ISA provided the high-gain antenna, much of the radio system and elements of several of Cassini's science instruments.

More information about the Cassini-Huygens mission is available on the Web, at: http://www.nasa.gov/cassini and http://saturn.jpl.nasa.gov.

For information about NASA and agency programs on the Web, visit http://www.nasa.gov