Titan's Atmosphere Revealed by New NASA Observation
Titan's atmospheric winds, temperature and mixing have been revealed by new observations from the Cassini spacecraft. The thick atmosphere of Saturn's giant moon is rich in organic compounds, whose chemistry may be similar to that which occurred on Earth before the emergence of life.

"Titan is not just a dot in the sky; these new observations show that Titan is a rich, complex world much like the Earth in some ways," said Dr. Michael Flasar of NASA's Goddard Space Flight Center, Greenbelt, Md., Composite Infrared Spectrometer instrument (CIRS) principal investigator. Flasar is lead author of a paper on this research published May 13 in the Journal Science.

The CIRS science team found evidence for an isolated polar vortex similar to one that occurs on Earth. CIRS' observations indicated that strong winds circulating around Titan's north pole isolate the atmosphere there during the polar night. Mixing of the polar region with the lower latitude regions of the atmosphere is inhibited during this time. On Earth, the south polar atmosphere is isolated for months during the long Antarctic winter allowing the formation of polar stratospheric clouds. Normally inert chlorine compounds (such as chlorine nitrate) undergo chemical reactions on the cloud crystals that free molecular chlorine. In the spring, sunlight decomposes the molecular chlorine, leading to the famous annual Antarctic “ozone hole”. Titan's atmosphere contains no ozone; however the CIRS results show that a large part of its atmosphere is isolated during the polar night, and that could allow unusual and complex chemistry to occur. 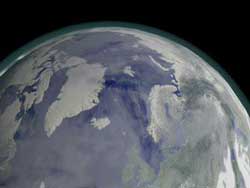 Image left: Polar Vortex Animation: Swirling stratospheric winds around the North and South Pole in winter, called the polar vortex, play a key role in the formation of the Earth's ozone hole. The winds confine cold air and allow polar stratospheric clouds (PSC) to form. Scientists have concluded that strong winds also swirl about Titan’s winter poles and believe there is a similar isolation of polar air on that body. Click image to see animation Credit: NASA

Like Earth, Titan's axis of rotation is tilted, so its poles also experience a long night during winter. The polar winter on Titan is many earth years long, because Saturn orbits the sun once in almost 30 years. Currently it is early winter in Titan's northern hemisphere. The CIRS team found significant temperature differences between Titan's north pole and the equator. The team used this observation to derive the speed of circumpolar winds around the north pole. The team believes these winds are isolating the atmosphere around Titan's north pole because the CIRS data showed that the concentration of several heavy organic (carbon-containing) molecules is highest there.

Heavy organic molecules form naturally in Titan's atmosphere, blanketing the moon with an orange haze. Titan’s atmosphere consists of about 98 percent nitrogen with most of the remainder being methane. When these molecules rise to the upper atmosphere, they are broken apart by sunlight and the fragments form heavier organic molecules like propane, ethane, acetylene, hydrogen cyanide, and even more complex molecules. Because the stratospheric air over the winter pole is cold, it sinks and brings down the heavy organic compounds that formed higher up. If the air over Titan's north pole is isolated during the winter, the heavy organics should build up in the stratosphere over the season. This is just what the CIRS team is seeing.

"We don't know if there are even more similarities to Earth's ozone hole process, like polar clouds that react with molecules in the atmosphere, simply because we haven't seen them yet," said Flasar. "But we wouldn't be surprised to discover them, nor would we be surprised to find that Titan has some unique twists of its own. This is what makes science so exciting. Nature is too rich for us to predict exactly what we will find when we go exploring."