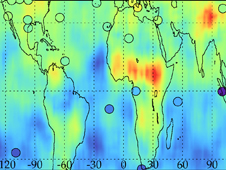 TES measurements of the distribution of carbon dioxide at an altitude of 5 kilometers (3.1 miles) between March and May 2006 are compared with NOAA GLOBALVIEW carbon dioxide measurements collected at surface sites (circles). Image credit: NASA/JPL
› Larger view

The newest addition is the Tropospheric Emission Spectrometer (TES) instrument on NASA's Aura spacecraft, launched in 2004. TES measures the state and composition of Earth's troposphere, the lowest layer of Earth's atmosphere, located between Earth's surface and about 16 kilometers (10 miles) in altitude. While TES was not originally designed to measure carbon dioxide, a team led by Susan Kulawik of NASA's Jet Propulsion Laboratory, Pasadena, Calif., has successfully developed and validated a TES carbon dioxide tool.

Kulawik's team analyzed three years of carbon dioxide data from TES and compared them to other carbon dioxide data sources. These sources included the Atmospheric Infrared Sounder (AIRS) instrument on NASA's Aqua spacecraft, aircraft and ground station samples, and two National Oceanic and Atmospheric Administration carbon dioxide research tools: GLOBALVIEW-CO2 and CarbonTracker. The TES data were found to be in good agreement with the other data. The TES study appears in the journal Atmospheric Chemistry and Physics.

Kulawik says TES data may be able to help significantly reduce uncertainties in annual regional estimates of where carbon dioxide is being created (sources) and where it is being stored (sinks).

"It's easy to see why you need measurements near Earth's surface, but TES measurements in the region of the atmosphere where carbon dioxide gets transported around the globe are also key to understanding carbon dioxide sources and sinks," Kulawik said.

Study co-authors Ray Nassar and Dylan Jones of the University of Toronto, Ontario, Canada, found that TES data can reduce -- by approximately 70 percent -- uncertainties in estimates of how much carbon dioxide is being released and stored in South America's tropical rain forests and Africa's grasslands. These include the Amazon, Congo and surrounding savannahs.

"These regions have a major influence on the global carbon cycle," said Jones. "The new carbon dioxide data from TES will help scientists reduce uncertainties in our understanding of carbon dioxide, particularly in tropical regions, where there are currently very few surface or aircraft measurements."

Carbon dioxide is the most important human-produced greenhouse gas. Its current global average concentration in Earth's atmosphere is about 389 parts per million by volume, increasing by about two parts per million each year. This concentration varies seasonally and by hemisphere. Estimates are challenging, as it varies by less than two percent globally in the mid-troposphere.

For more on the Tropospheric Emission Spectrometer, visit: http://tes.jpl.nasa.gov .