Ozone pollution caused by burning of fossil fuels is a major health concern in Earth's Northern Hemisphere mid latitudes, including the United States. But for the more than two-thirds of Earth's population that lives in the tropics - the area bounded by the Tropic of Cancer on the north and Tropic of Capricorn on the south - ozone levels in Earth's lower atmosphere, called the troposphere, are also driven by other mechanisms, namely biomass burning (the burning of forests, grass lands, etc.).

In the first study, NASA and university researchers investigated the extent of biomass burning in the southern tropics and quantified its effects on ozone formation. Biomass burning is the driving form of pollution in these tropical areas. It adversely affects air quality and influences climate by producing carbon monoxide and nitrogen oxides, two pollutants that lead to the formation of ozone.

Until recently, scientists have had difficulty measuring how much biomass burning is occurring in this region, since much of it takes place in the world's developing countries. In addition, the complex interactions between chemistry, weather and natural sources of ozone make it difficult to understand how biomass burning and ozone formation are linked.

With the launch of new atmospheric monitoring satellites such as NASA's Aura in the past few years, scientists now have new ways to track different chemicals present in Earth's atmosphere. These data are giving researchers a more complete picture of the causes and effects of atmospheric pollution. 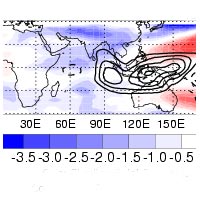 This combination technique led to a surprising result: the amount of biomass burning in sub-equatorial Africa and the Indonesia/Australia region was underestimated, by a factor of between two and three.

The new combination technique also enabled the researchers to link the observed biomass burning to ozone that was later formed over and downwind of these regions.

"Biomass burning and ozone formation in this region are particularly sensitive to climate patterns such as El Nino," added co-author Dr. Kevin Bowman of NASA's Jet Propulsion Laboratory, Pasadena, Calif. "Using this approach, we will be able to monitor how changes in these patterns impact air quality and climate throughout the tropics."

In the second study, to be published soon in Geophysical Research Letters, NASA and university researchers investigated intraseasonal (30- to 90-day) variations of tropical total ozone -- the amount of ozone present in a column of Earth's atmosphere -- and whether they are connected to a climate pattern known as the Madden-Julian Oscillation.

The Madden-Julian Oscillation is a cyclical pattern of slow, eastward-moving waves of clouds, rainfall and large-scale atmospheric circulation anomalies that can strongly influence long-term weather patterns around the world. It's a 30-to-90-day cycle, and it spans nearly half of Earth's equator, primarily over the Indian Ocean and western Pacific.

Using NASA satellite data, the researchers found the total amount of ozone in the tropics varies significantly in association with the Madden-Julian Oscillation, with the strongest connection observed in the subtropics. These relatively short-term variations were found to be comparable to more well-known, longer time scale variations, such as El Nino or the solar cycle.

"This study demonstrates the potential for new global ozone measurements such as the Atmospheric Infrared Sounder to improve our understanding of ozone chemistry and its effects on climate change," said lead author Dr. Yuk Yung of the California Institute of Technology, Pasadena, Calif. "Further detailed data analyses of ozone from ozone measuring balloons, satellite instruments and models are needed to better understand the processes at work."

Study co-author Dr. Baijun Tian of JPL says this finding is significant because scientists already know that the beginning of Madden-Julian Oscillation cycles is potentially predictable two to four weeks in advance. "This implies that variations in total atmospheric ozone may also be predictable with similar lead times over much of the tropics," he said.

For the Madden-Julian Oscillation study, data were obtained from NASA's Atmospheric Infrared Sounder on its Aqua spacecraft and its Total Ozone Mapping Spectrometer on the National Oceanic and Atmospheric Administration's Nimbus-7 spacecraft.