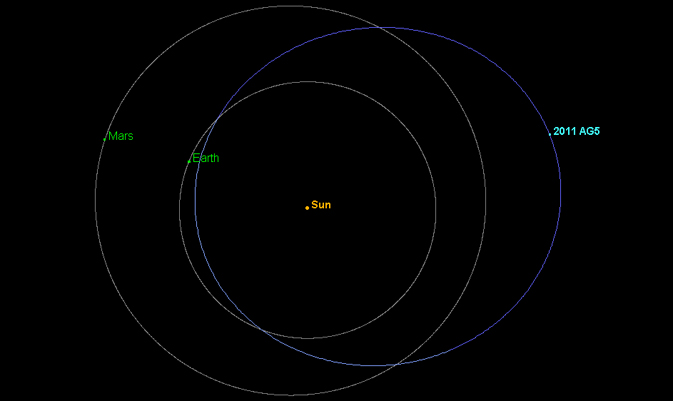 The orbit of asteroid 2011 AG5 carries it beyond the orbit of Mars and as close to the sun as halfway between Earth and Venus. Image credit: NASA/JPL-Caltech/NEOPO › Larger view

Asteroid 2011 AG5 has been receiving a lot of attention lately because of a very unlikely scenario which would place it on an Earth-interception course 28 years from now. Here is a scientific reality check of this relatively nondescript space rock which is currently ranked a "1" on the 1 to 10 Torino Impact Hazard Scale.

As of Feb. 26, 2012, asteroid 2011 AG5 is one of 8,744 near-Earth objects that have been discovered. It is approximately 460 feet (140 meters) in size and its orbit carries it as far out as beyond Mars’ orbit and as close to the sun as halfway between Earth and Venus. It was discovered on Jan. 8, 2011, by astronomers using a 60-inch Cassegrain reflector telescope located at the summit of Mount Lemmon in the Catalina Mountains north of Tucson, Arizona.

Due to its current location in the daytime sky, observations of 2011 AG5 cannot be made by Earth-based telescopes, so its orbit has not yet been determined to a level where scientists can confidently project its location decades into the future. But that day is coming.

"In September 2013, we have the opportunity to make additional observations of 2011 AG5 when it comes within 91 million miles (147 million kilometers) of Earth," said Don Yeomans, manager of NASA's Near-Earth Object Program Office at the Jet Propulsion Laboratory in Pasadena, Calif. "It will be an opportunity to observe this space rock and further refine its orbit. Because of the extreme rarity of an impact by a near-Earth asteroid of this size, I fully expect we will be able to significantly reduce or rule out entirely any impact probability for the foreseeable future." Even better observations will be possible in late 2015.

"Again, it is important to note that with additional observations next year the odds will change and we expect them to change in Earth's favor," said Yeomans.

NASA detects, tracks and characterizes asteroids and comets passing close to Earth using both ground- and space-based telescopes. The Near-Earth Object Observations Program, commonly called "Spaceguard," discovers these objects, characterizes a subset of them, and determines their orbits to determine if any could be potentially hazardous to our planet.