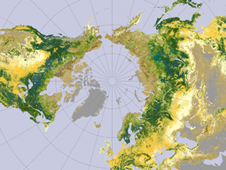 Boreal forests, depicted here in dark green, host an increasing number of forests fires. Their smoke plumes are the focus of observations during NASA's ARCTAS mission. Credit: NASA's Earth Observatory
> Larger image
As the summer fire season heats up, NASA aircraft are set to follow the trail of smoke plumes from some of Earth's northernmost forest fires, examining their contribution to arctic pollution and implications for climate change.

Starting June 29, NASA's DC-8 and P-3B aircraft, based at a Canadian military base in Cold Lake, Alberta, will begin their final three-week deployment of the Arctic Research of the Composition of the Troposphere from Aircraft and Satellites, or ARCTAS, mission. A third NASA aircraft, the B-200 King Air, will fly from Yellowknife, Canada. The mission is the most extensive field campaign ever to study the chemistry of the Arctic's lower atmosphere. The three airborne laboratories are equipped to fly through the smoke plumes of northern-latitude forest fires. The resulting data, when combined with simultaneous satellite measurements, could reveal the impact of forest fires on the arctic atmosphere.

"The summer campaign will focus on boreal forest fire emissions," said Jim Crawford, manager of the Tropospheric Chemistry Program at NASA Headquarters in Washington. "Coupled with the observations of arctic haze during the spring deployment based in Alaska, these data will improve our understanding of the relative importance of these two influences on arctic atmospheric composition and climate." 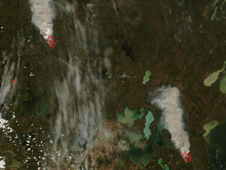 The MODIS instrument on NASA's Terra satellite observed dense smoke plumes in Manitoba, Canada on May 29, 2008. Credit: NASA/NOAA
> Larger image
> Labeled image Boreal forests, which span Earth's northern latitudes, have seen a rise in natural forest fires during the last decade. Researchers have debated the degree to which these fires contribute to the Arctic's atmosphere compared to other sources, such as human-caused emissions from lower latitudes. The ARCTAS flights through smoke plumes, over and downwind from their source, will reveal their composition and transport path.

Researchers also will use the data to examine how the chemistry of smoke plumes changes over time and distance. Plume chemistry can contribute to the formation of ozone in the lower atmosphere. Particulates in smoke plumes can affect Earth's radiation balance with consequences for climate change.

The mission also is expected to help researchers interpret data from NASA satellites orbiting over the Arctic. NASA's Cloud-Aerosol Lidar and Infrared Pathfinder Satellite Observation, or CALIPSO, satellite can measure the height of various plume components in the atmosphere, information critical to predicting plume movement. Researchers will use data from ARCTAS to validate observations from CALIPSO and other satellites to improve model predictions of fire impacts on chemistry and climate.

"Aircraft experiments provide the greatest possible detail on the state of the atmosphere, but only for short, intense periods of sampling," Crawford said. "By conducting these flights in tight coordination with satellites and computer models, airborne observations lead to improvements in the interpretation of satellite observations and better representation of atmospheric processes in chemistry and climate models. This improves our confidence in models' ability to monitor and predict future changes."

The Yellowknife site also will host a portable science station from Pennsylvania State University that collects ground-based ozone and aerosol measurements, in conjunction with daily launches of balloon-borne instruments planned by Environment Canada and the National Oceanic and Atmospheric Administration.

The ARCTAS flights are being coordinated with research flights from Kangerlussuaq, Greenland being conducted by the Centre National de la Recherche Scientifique -- a French government-funded research organization -- and the German Aerospace Center.

The summer deployment of ARCTAS follows a spring deployment based in Fairbanks, Alaska. That mission focused on atmospheric composition, pollution transport pathways, and the formation of "arctic haze," which is fueled by sunlight that causes chemical reactions in pollutants that accumulate over the winter. Kathryn Hansen
NASA's Goddard Space Flight Center
› Back To Top