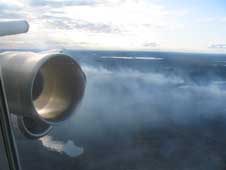 An instrument from the National Center for Atmospheric Research collects data from a smoke plume generated by a forest fire over Canada on July 1, 2008. Credit: NASA
> Larger image
In a nondescript room on a Canadian Air Force Base, an international team of fire trackers, weather forecasters and various atmospheric scientists puzzle over computer models, satellite tracks and flight charts. Their goal is to find the best fire targets and tailor the flight path of NASA’s airborne laboratories to track and investigate the properties of smoke plumes.

The researchers are part of the summer deployment of NASA’s Arctic Research of the Composition of the Troposphere from Aircraft and Satellites, or ARCTAS, mission. The mission is just five days into its summer study of the smoke plumes from northern latitude forest fires, and already the choreographed effort between modelers and experimenters is producing a wealth of new data.

“Given the vagaries of plume timing and location, the presence of clouds, and coordinating with satellite overpasses, the mission is coming together very well,” says Jim Crawford, manager of the Tropospheric Chemistry Program at NASA Headquarters in Washington who is on-location for the mission.

As expected in the height of fire season, Canada is turning up some fires worthy of aerial investigation. Almost daily, scientists and crew are flying from either the 4 Wing Air Force Base in Cold Lake, Alberta, on NASA’s DC-8 and P-3B aircraft, or from Yellowknife, Northwest Territories, on NASA’s B-200.

Instruments on the aircraft have sniffed the presence of smoke over Canada from distant fires in Siberia and California. But instruments are also busy sampling smoke plumes from fires originating in northern Canada, characterizing their chemical components and other physical properties. Flight paths, often adjusted on the fly to accommodate Mother Nature, have allowed scientists to collect this data from around and downwind of plumes of all sizes. 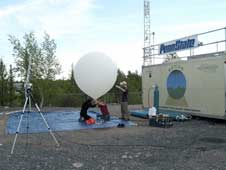 University of Toronto and Pennsylvania State University researchers prepare to launch a balloon from Yellowknife, Northwest Territories, to collect weather and ozone data. Credit: Greg Merkes/NASA
> Larger image With the samples collected close to the source and downwind, researchers hope to learn how the plumes age over time. They can also examine the plume’s movement, both horizontally across the landscape and vertically into the atmosphere. Satellites have recently shown smoke plumes reaching higher into the atmosphere than previously thought possible, and now, aircraft will help confirm what satellites observed and improve future model predictions.

If models are correct, weather and fire conditions should culminate into a fury of activity on the Fourth of July, creating their own type of atmospheric “fireworks”. Specifically, researchers are hoping to spot the infamous pyrocumulus plume. Under atmospheric conditions similar to those that generate thunder storms, this type of plume can loft particles high into the upper atmosphere. The particles can then jet around the globe carried by high wind speeds and remain at altitude for an extended period, potentially impacting climate.