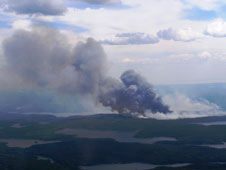 The chemical and particulate composition of the smoke plume from this boreal forest fire near Ft. McMurry in northern Alberta was the subject of an aerial study by ARCTAS mission scientists aboard NASA's DC-8 and P-3 science aircraft on July 1. NASA Photo. While most citizens of the United States are celebrating the nation's independence during the July 4th weekend, more than 100 scientists, flight crew and mission support personnel from NASA and a variety of universities and government research agencies are working in northern Canada, gathering data in the second phase of the Arctic Research of the Composition of the Troposphere from Aircraft and Satellites – or ARCTAS – field campaign.

A flight of two NASA science laboratory aircraft, a modified DC-8 from the Dryden Flight Research Center in Southern California and a P-3 from the Wallops Flight Facility in Maryland, was scheduled on Friday, July 4 that would collect data while flying under Earth-monitoring satellites for data comparison.

During an eight-hour flight July 1, NASA's DC-8 airborne lab sought out forest fire smoke plumes and forest fire-produced cumulo-nimbus events while sophisticated instruments mounted on the aircraft collected data to determine the composition of particulate matter in those plumes. After locating a fire, the aircraft then flew patterns at several altitudes around the fire and at various points downwind s far as 375 nautical miles from fire's point of origin. After back tracking up this same fire's smoke plume, similar patterns were repeated from the fire's point of origin downwind for several hundred nautical miles.

Both four-engine aircraft are deployed out of a Canadian Forces air base at Cold Lake, Alberta during the campaign, while a third NASA aircraft, a B-200 King Air from Langley Research Center, Virginia, is flying out of Yellow Knife, Northwest Territories.

The ARCTAS investigation is intended to improve understanding of how the composition of the Arctic atmosphere is influenced by long-range transport of pollution from lower latitudes and local emissions from boreal wildfires and their impact on Arctic quality and climate. Validation of the NASA satellites that continuously monitor the global atmosphere is also a major focus of this mission.
› Back To Top