An International Flare for Modeling 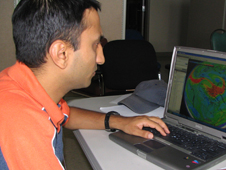 Bhupesh Adhikary, a Ph.D. student at the University of Iowa, Iowa City, studies a computer model that can be used to track the emissions from forest fires.
Credit: NASA
> Larger image
Atmospheric scientist Bhupesh Adhikary has participated in numerous NASA field missions. But the summer deployment of the NASA's ARCTAS mission afforded the modeler his first chance to fly on the mission's airborne science laboratory and watch his 3-D atmospheric models in action.

In June and July 2008, Adhikary was one of more than 100 scientists from around the world who gathered in Cold Lake, Alberta for the Arctic Research of the Composition of the Troposphere from Aircraft and Satellites (ARCTAS) mission. For more than two weeks, researchers made near-daily flights aboard aircraft loaded with instruments to collect atmospheric data through and downwind of smoke plumes from Canadian forest fires. The results are expected to help researchers characterize the smoke plumes' chemistry, physical properties and impact on the atmosphere in the Arctic.

Modelers onsite helped researchers plan flight paths through and downwind of smoke plumes in a pattern that would maximize measurements in line with the mission's science goals. Adhikary, a Ph.D. student at the University of Iowa, Iowa City, used a computer model that could forecast the movement of various emissions including carbon monoxide, which can be used to track the emissions of fires.

The computer model was created in the 1970s by Adhikary's Ph.D. advisor, Gregory Carmichael of the University of Iowa. Since the model's inception, many people including Adhikary have contributed to its development by incorporating new atmospheric findings that continue to refine and improve the model's accuracy.

An advantage of modeling is that Adhikary can work from nearly anywhere, whether it's his hometown in Nepal or in the remote Cold Lake, Alberta, as long as he has a computer and an Internet connection.

Every morning during the mission, Adhikary looked at the new updated forecast and presented a summary slide. "All of the modelers did this and then we would come up with a consensus based on differences and similarities between them to determine the best location for the airplanes to fly," he said.

The results, in turn, will help modelers fine-tune their models. "The models are uncertain, so we like these campaigns so we can improve our models based on observations -- see how well our model predicted versus what was observed," Adhikary said. 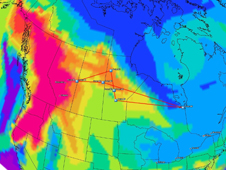 An image from a computer model shows a carbon monoxide plume (red) on July 4, produced from Canada forest fires. The red line was a proposed flight path to sample the plume.
Credit: Bhupesh Adhikary
> Larger image Adhikary's venture into the field provided a first-hand look at how his models performed.

"When I was onboard looking at my model products and then seeing out the window, I could look at where my model placed the plumes and compare that to where they actually were. It gave me a better feel of what my model was doing, which was interesting -- the eight-hour flight didn't seem that long to me at all," Adhikary said.

What Adhikary saw in the field countered his expectations going into the mission. "I was expecting emissions from Canadian fires to just dominate everything," he said. But in addition to emissions measured from Canadian forest fires -- most started by lightning -- measurements turned up natural and human-caused pollution from California and Asia, mixed throughout the atmosphere from very low altitude up to about 6 miles.

Still, Adhikary knows that pollution, like weather, is oblivious to geographical borders. "When I model I'm looking at Asia, North America and Europe, so it gives an international flare to the work, which is very important to me," he said.

"In Nepal, we don't have the infrastructure that is needed to do modeling, but now computers are getting cheaper and when I graduate I hope to go back and start there what I'm doing here," he said. "We don't have a chemical engineering or an atmospheric science department, so that's the charm of going back -- I would like to go and try it out, see if I can build collaborations to stay involved with this type of field mission from afar and at the same time help Nepal."