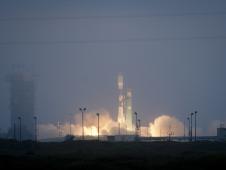 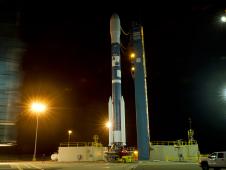 The satellite observatory is nestled inside the top of a United Launch Alliance Delta II rocket. Spacecraft separation from the Delta II is scheduled to occur 56 minutes 42 seconds after launch. One minute later, the observatory's solar panels are scheduled to deploy.

The following spacecraft events will be checked off as they occur:

✓ Launch The Delta II rocket carrying the Aquarius/SAC-D observatory, with NASA's Aquarius mission, has lifted off into the morning skies above Vandenberg Air Force Base, Calif. It is heading up and out over the Pacific Ocean.

✓ Coast phase
The Delta II rocket's second-stage engine has temporarily stopped firing, as planned, and the rocket and Aquarius/SAC-D observatory have begun a planned 42-minute, 40-second coast phase. During this time, the second-stage engine will perform two sets of attitude re-orientation maneuvers.

✓ Spacecraft separates and solar arrays are deployed
The Aquarius/SAC-D observatory has successfully separated from its Delta II rocket, ground controllers have acquired its signal, and its solar arrays have been deployed to provide power.

The launch will also be online, with a live chat available, on Ustream TV, at http://www.ustream.tv/nasajpl2 .