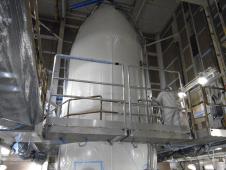 The new launch date will allow the launch team to complete additional review of an inconsistency found in the Delta II launch vehicle flight profile for wind conditions on the day of launch. These data are used to steer the Delta II through upper level winds. The weather forecast for June 10 shows a 100 percent chance of favorable weather conditions for the launch.

Media are invited to see and photograph the Delta II with Aquarius/SAC-D at the launch pad on Thursday, June 9. Media will depart for the pad at 9:30 p.m. PDT from the Vandenberg Main Gate on California State Road 1.

Media covering the launch on Friday, June 10, will be escorted to the press viewing site from the Vandenberg Main Gate. Media should meet at 6 a.m. PDT at the pass and identification building.

For more information about Aquarius/SAC-D, visit: http://www.nasa.gov/aquarius . JPL is managed for NASA by the California Institute of Technology in Pasadena.