Update: Apollo 11 Tapes
NASA personnel continue to sift through 37-year-old records in their attempt to locate the magnetic tapes that recorded the original Apollo 11 video in 1969. The original tapes may be at the Goddard Space Flight Center, which requested their return from the National Archives in the 1970s, or at another location within the NASA archiving system. Despite the challenges of the search, NASA does not consider the tapes to be lost.

The tapes were sent from Goddard to a storage facility of the National Archives in late 1969. This kind of transfer is standard for government records, whether contracts, memos, photographs or space telemetry. Among the 2,614 boxes of Apollo mission tapes that went to the facility, the original Apollo 11 may have been among them. Between 1975 and 1979, NASA's Goddard Space Flight Center recalled all but two of the 2,614 boxes. The remaining two boxes included telemetry tapes from Apollo 9, leading engineers to believe that these shipments contained most of the Apollo related materials. 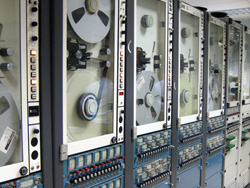 Image left: The machines pictured read the 1-inch-wide magnetic data tape from their 14-inch round reels. Multiple machines are used because each reel only records about 15 minutes worth of data. As one reel fills, the next machine automatically starts recording a slight overlap for data continuity. Credit: NASA. (Click on image to enlarge.)

About 18 months ago, NASA Goddard began an informal search for the tapes after some inquiries from retirees from the space agency and others from the Apollo program. NASA engineers are hopeful that when the tapes are found, they can use today's digital technology to provide a version of the moonwalk that is much better quality than what we have today. Goddard engineers were able to extract data from a nearly-identical type of tape recorded in 1969 of an Apollo simulation from the Honeysuckle Creek, Australia tracking station providing optimism that when the tapes are located, we can preserve original video. 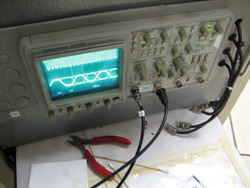 Image right: Pictured on the small screen in this image is sample raw data from a magnetic data tape before being split out into the various video, telemetry, biomedical sensor, and voice communications between the spacecraft and the Earth. Credit: NASA. (Click on image to enlarge.)

In the event the tapes are found, NASA Goddard is taking steps to make sure all the unique hardware required to process the Apollo 11 moonwalk tapes is still around and can be used to make digital reproductions of the tapes. 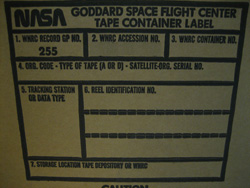 Image left: Pictured is the side of a blank Tape Container box. Boxes like these likely contain the tapes in question and have tracking information filled out on the label from when they were initially sent to the National Records Center. Each box can contain up to five data tapes. Credit: NASA. (Click on image to enlarge.)

The signal originated on the Moon, traveled through the emptiness of space back to Earth, and was received by tracking stations on the ground in Goldstone, California; Parkes, Australia; and Honeysuckle Creek, Australia. These three tracking stations recorded the original signal that included the television video, as well as voice, telemetry, and biomedical data. The data was recorded onto magnetic tapes, and simultaneously converted into a U.S. broadcast format for transmission to Houston and final release to U.S. television networks. The equipment used to convert the signal unfortunately caused some unavoidable loss of image quality.