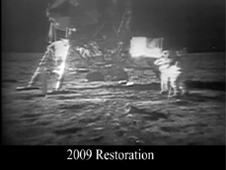 A team of Apollo-era engineers, who helped produce the 1969 live broadcast of the moonwalk, acquired the best of the broadcast-format video from a variety of sources for the restoration effort. These included a copy of a tape recorded at NASA's Sydney, Australia, video switching center, where down-linked television from Parkes and Honeysuckle Creek was received for transmission to the U.S.; original broadcast tapes from the CBS News Archive recorded via direct microwave and landline feeds from NASA's Johnson Space Center in Houston; and kinescopes found in film vaults at Johnson that had not been viewed for 36 years.

"The restoration is ongoing and may produce even better video," said Richard Nafzger, an engineer at NASA's Goddard Space Flight Center in Greenbelt, Md., who oversaw television processing at the ground tracking sites during Apollo 11. "The restoration project is scheduled to be completed in September and will provide the public, future historians, and the National Archives with the highest quality video of this historic event."

NASA contracted with Lowry Digital of Burbank, Calif., which specializes in restoring aging Hollywood films and video, to take the highest quality video available from these recordings, select the best for digitization, and significantly enhance the video using the company's proprietary software technology and other restoration techniques.

Under the initial effort, Lowry restored 15 scenes representing the most significant moments of the three and a half hours that Armstrong and Aldrin spent on the lunar surface. NASA released the video Thursday at a news conference at the Newseum in Washington.

On July 20, 1969, as Armstrong made the short step off the ladder of the Lunar Excursion Module onto the powdery lunar surface, a global community of hundreds of millions of people witnessed one of humankind's most remarkable achievements live on television.

The black and white images of Armstrong and Aldrin bounding around the moon were provided by a single small video camera aboard the lunar module. The camera used a non-standard scan format that commercial television could not broadcast.

NASA used a scan converter to optically and electronically adapt these images to a standard U.S. broadcast TV signal. The tracking stations converted the signals and transmitted them using microwave links, Intelsat communications satellites, and AT&T analog landlines to Mission Control in Houston. By the time the images appeared on international television, they were substantially degraded.

Visit http://www.nasa.gov/multimedia/hd/apollo11.html to view the newly restored scenes from the Apollo 11 restoration effort.