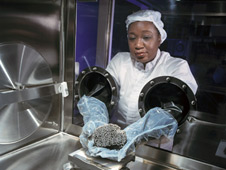 Andrea Mosie, principal scientist with GeoControl Systems, Inc. (ESCG), holds a lunar sample returned by the crew of Apollo 15. This vesicular mare basalt was picked up by astronaut Jim Irwin near the edge of Hadley Rille in the area called the Terrace. This rock is approximately 3.4 billion years old. Credit: NASA

A one-of-its-kind facility that preserves and protects a national treasure marks a key anniversary this month as it gets readied for future deliveries from the moon.

The Lunar Sample Laboratory Facility in Building 31N at Johnson Space Center is NASA's chief repository for materials returned from the moon during the Apollo era. Dedicated on July 20, 1979, after two years of construction, the facility marks its 30th anniversary this month. Built for a cost of $2.5 million, the two-story, 14,000-square-foot facility provides permanent storage of the lunar sample collection in a physically secure and non-contaminating environment.

Before the construction of the Lunar Sample Laboratory Facility, lunar materials were stored in the Lunar Receiving Lab in Building 37 and in vaults across the JSC campus. The Building 37 lab had adequate facilities to process samples for the current mission but was not equipped to process or store samples from previous missions. Modifications made to the existing Building 31 provided the needed processing space, but a better long-term solution for storage and processing space was needed.

The construction of a new facility to house the lunar samples was proposed. However, Congress would not authorize its construction until a remote site was found to store a representative set of lunar samples. In the mid-1970s, an empty ammunition bunker at Brooks Air Force Base in San Antonio was selected for the remote facility. A vault was built inside the building to store the smaller set of lunar materials. With the decommissioning of Brooks Air Force Base, a new secure facility for the remote storage of lunar materials was needed. In 2002, those materials were moved to a new smaller curatorial facility erected inside an existing secure building in White Sands, N.M.

“The facility was incredibly well designed,” said Dr. Gary Lofgren, curator of the Lunar Sample Laboratory Facility and a planetary scientist in JSC’s Astromaterials Research and Exploration Science (ARES) Directorate. “There were several National Academy of Science members on the committee that laid out the science requirements for the building and reviewed designs to ensure their inputs were implemented. They anticipated every contingency you can imagine to safeguard the samples.”

In recent years, the facility has undergone extensive renovations including adding new security monitors, replacing the air handler and the construction of a new liquid nitrogen tank and supporting structures located outside the facility. Upcoming planned improvements include new wall and floor coverings.

Members of JSC’s Astromaterials Acquisition and Curation Office within ARES curate the lunar collection. They keep the collection in pristine condition, while making the samples available to approved scientists, engineers and educators. Pristine lunar samples are stored and handled in stainless steel cabinets purged by high-purity nitrogen gas. The nitrogen is continuously monitored for oxygen and moisture contents.

The lab allocates about 300 samples each year for scientific research and engineering studies. Today, about 90 active lunar principal investigators worldwide, mainly from the university community, have 4 percent of the collection on loan for their studies. Scientific study focuses on three main topics: comparative planetology, the history of the planets and investigating the collision theory for the origin of the moon. The engineering community focuses on the physical properties in the samples.

“Scientists do what is called comparative planetology. Samples from one of those four sources are studied, and then those properties that were studied in one type are studied in another to see how properties vary among planetary objects.”

The origin of the moon is being revealed by the study of lunar samples. The collision theory, supported by most planetary scientists, holds that the moon formed from debris ejected from the Earth when a large object (possibly as large as Mars) crashed into the Earth. Simulations of this scenario show that energy from such a collision produced a stream of broken and vaporized rock from the impact, and that the moon formed from this material.

Much has been learned about the moon from studying the samples, but much more remains to be discovered. Future return missions to gather more samples will be welcomed by the scientific community.

“We have samples from only six lunar sites,” said Lofgren. “Just imagine if you had samples from only six places on Earth—there would be a lot you would not know about. Specifically, we still don’t understand the full breadth of the evolution of the moon. We need a broader range of samples to date to capture the history of the evolution of the planet.”

For more information on NASA’s lunar samples and the lab, visit: