Grow Text SizeShrink Text Size
Hiring a National Hero
Forty years ago, NASA launched Apollo 11, the first mission to land on the moon. From hiring Neil Armstrong to researching the propellant that took him to the moon, NASA's Glenn Research Center played a key role in making the Apollo 11 mission possible. 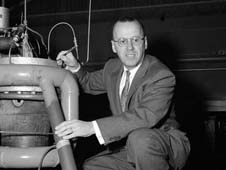 Graham poses with rocket components at a 1958 Cleveland Press Newspaper event. Credit: NASA While the U.S. was fighting to catch up to Russia in the space race, Glenn worked hard to make progress on American space exploration.

Armstrong started his NASA (then NACA) career at Lewis Research Center (now Glenn) in 1955 after answering an ad for test pilots for the X-15 rocket-propelled plane. Lewis employee Bob Graham conducted the interview.

"The thing that impressed me was he was so articulate and wasn't interested in any of the fringe benefits," remembered Graham. "He was just interested in the position."

Armstrong told Graham he always wanted to be a NACA test pilot. He spent eight months in Cleveland before heading to the air force base and then the astronaut program.

While recruiting Armstrong was a career highlight that can hardly be forgotten, Graham made another major contribution to the Apollo 11 mission that took Armstrong to the moon.

Graham was a major proponent for liquid hydrogen research, encouraging and convincing his division chief, Ted Olsen, that research into the heat transfer properties of hydrogen was worthwhile. As head of the Rocket Fluid Dynamics Section, Graham planned the laboratory's first seminar on rocket propulsion. He had the full support of Chief of Research Abe Silverstein, an advocate for liquid hydrogen, who would later become Center Director.

Armed with Graham's research, Glenn scientists and engineers soon realized liquid hydrogen was the best bet for breaking Earth's orbit and reaching the moon. Work with liquid hydrogen as rocket fuel led to the development of the J-2 and RL-10, the liquid hydrogen rocket engines used in the Saturn V and Centaur rockets.

At the time, NASA's Centaur rocket was plagued with problems. Lewis took control of Centaur, promising to make it work in time to meet President John F. Kennedy's deadline of putting a man on the moon by the end of the decade.

Slowly, America started gaining ground against Russia. In 1963, Centaur had its first successful flight with an Atlas booster. 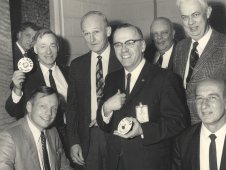 Dr. Robert Graham (center) recruited Neil Armstrong (seated left) in 1955 as a test pilot for the National Advisory Committee for Aeronautics. Irving Pinkel (top left), then associate chief of the Physics Division, hired Armstrong. Centaur was used to launch Surveyor 1 to the moon in 1966. This mission landed the first U.S. spacecraft on the moon as a precursor to the Apollo missions. Information gathered by the Surveyor Program helped determine the safest landing site for Apollo 11.

The U.S. continued to make progress. Armstrong served as commander for the Gemini 8 mission, which completed the first successful docking in space and rendezvous with another spacecraft.

Apollo 11 launched on July 16, 1969 with Armstrong as commander. "I perceived him as someone outstanding, so I wasn't surprised when he became commander for the first moon landing," said Graham.

On July 20, the lunar lander Eagle set down on the moon. What many people don't know is that the Apollo 11 mission was only seconds away from disaster.

As Armstrong and Lunar Module Pilot Edwin "Buzz" Aldrin approached the Sea of Tranquility, they noticed they were going to overshoot the planned landing spot. Worse yet, they were almost out of fuel. They had two options: land or abort.

"No pilot likes to land in a bad place," joked Armstrong at NASA's 50th anniversary celebration in Cleveland. "Pilots by nature will go to any extreme to find a good place to land, and that's what we did."

With only 16 seconds of fuel left, the Eagle touched down on the moon on July 20, 1969. Armstrong then said the now famous words, "Houston, Tranquility Base here. The Eagle has landed."

Hours later, Armstrong and Aldrin were ready to make history by walking on the moon.

As Armstrong took the first step onto the moon, he said, "That's one small step for man, one giant leap for mankind."

Graham remembers hearing Armstrong say those iconic words. "When he said those first words…" recalled Graham as he closed his eyes and put his hand on his chest, indicating the overwhelming feeling of the moment.

After spending two and half hours on the moon, the two astronauts packed up to head home, leaving behind an American flag and a plaque, among a few other memorabilia.

Armstrong's historic first step on the moon ignited dreams in children across the nation, especially in his birthplace, Ohio, which is home to 24 astronauts. Graham and NASA Glenn helped make those dreams possible.