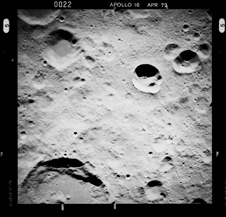 The complete photographic record from the Apollo Program has remained nearly untouched in a freezer at NASA’s Johnson Space Center—until now.

Forty years after the first human being walked on the moon, high-resolution scans of original Apollo flight films are being made available to researchers and the general public on the Internet. The digital archive is being created through a collaboration between the Information Resources Directorate at JSC and Arizona State University.

This project marks the first time that digital scans have been made of the original lunar flight film returned by the Apollo missions. The digital archive includes photos taken from lunar orbit and the lunar surface. The most detailed images from lunar orbit show rocks and other surface features.

Maura White, NASA multimedia technical monitor in the JSC Information Resources Directorate, explains, "We partnered with ASU on the Space Act Agreement to provide high-resolution imagery for analysis. The resulting digitization and archiving of original film from the lunar surface is a huge benefit to both NASA and ASU researchers."

Mark Robinson, professor of geological sciences in the School of Earth and Space Exploration at ASU, is the lead scientist on the Apollo digitizing project. He is also the principal investigator for the Lunar Reconnaissance Orbiter (LRO) Camera, a suite of three separate high-resolution imagers on board NASA’s LRO, which launched on June 18, 2009.

“For many years I have wanted access to the full-resolution and full dynamic range of flight films to support lunar geologic investigations,” said Robinson. “Of course there was also the pure ‘way cool’ factor of seeing the history of the first human exploration of the moon in all its glory. The available imagery, though spectacular, was of inferior quality to what was safeguarded in the vault at JSC. Scanning technology has finally caught up to the quality of the flight films, so the time is right to get these images scanned.”

Astronaut John Grunsfeld, the JSC project lead, wanted to make sure that these classic images were available to the widest possible audience of lunar explorers. "I've always been fascinated by looking at the moon through small telescopes. When I became an astronaut I had hopes of some day working on the lunar surface like my Apollo astronaut heroes. For now, these digital scanned images are the next best way to explore the moon. When we go back to the moon in the Constellation Program these scans and the images from LRO will be our best guides."

The original films have rarely been accessed because they are irreplaceable. NASA made sets of duplicate images after each lunar mission came back to Earth, placing them in scientific libraries and research facilities around the world. These second-generation copies, and subsequent copies of copies, are what researchers and the public have seen until now. Multiple copying reduces sharpness and increases contrast, thereby blurring details in the original films.

The original flight films are being scanned at a resolution of 5 microns, which is the equivalent of 5080 dpi. All of the 5-inch metric film frames from Apollo 15, 16 and 17 have been scanned and processed, resulting in a collection of 10,153 images. The team is beginning to scan the 4-foot by 5-inch lunar panoramic orbital film from those missions. The panoramic film has a collection of 4,366 images. 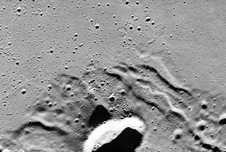 This panoramic image from Apollo 15 shows an area of the lunar surface west of Vallis Schroteri. Credit: NASA

The scan crew then opens the canister and inspects the film for damage or debris. If needed, the film is cleaned with two pieces of velvet cloth. The film is then placed on the scanner.

The software used in the Leica scanner was specially modified for the project. The scanned images had to meet requirements specified by the science community.

“Our approximate goal was a four- to six-micron scanning range,” said Roger Mitchell, software engineer with InDyne Inc. “Our research said that was the resolution of the grain on the film. That was the capability of that film of that day.”

The software divides the 4-foot-long panoramic film into eight frames per image. When it stitches those images, the scans overlap. The scanner looks for identical points and matches them. The difficulty arises when there are two areas of overexposed film and no points to match up.

If this happens, the lead scanner for the project, Rob Ingram with InDyne, looks for marks on the film or tiny craters that the software failed to pick up and matches them manually. “Sometimes it’s like trying to stitch together a photograph of a glass of milk,” says Will Close, InDyne supervisor of the digitizing project.

The scanned images are loaded onto 500-gigabyte removable hard drives and shipped overnight to ASU. Undergraduates load the files into the ASU system and create smaller-resolution versions and other related data for each image. The full-resolution raw scans and the extra products are all made available to the public on the ASU Apollo Scan project webpage. The hard drives are then shipped back to JSC and the cycle starts again.

The images offer the public a never-before-seen look at Earth’s nearest planetary neighbor. The science community is interested in comparing these decades-old images with those that are being sent back by the LRO to look for changes in the lunar surface.

“One of the key science goals of the Lunar Reconnaissance Orbiter Camera is to determine the current rate of impacts on the moon,” said Robinson. “To do so we are planning to rephotograph areas of the moon covered in the Apollo 15, 16 and 17 panoramic frames. We can then simply search for and count impact craters that have appeared since the early 1970s. Right now there are large differences in various model predictions of how many craters should have formed in this time period—we’ll simply find out—there is nothing like real data!”

The images are available, to browse or download, at http://apollo.sese.asu.edu
› Back To Top